Did You Know There Are Different Bourbon Yeasts?

You are here: News » Did You Know There Are Different Bourbon Yeasts?

We’re kind of on a bourbon kick, but really — who isn’t. “The billion-dollar bourbon boom” of 2014 proves it.

Backtrack a decade and you’d find a suffering American whisky industry. Fast-forward to the present, though, and bourbon couldn’t be any more popular; the corn-based (at least 51%), barrel-aged amber liquor is everywhere. Euromonitor reported that domestic whiskey sales had soared 40% in the past 5 years. Tim DeLong, managing director for global whiskeys at Brown-Forman (producers of Jack Daniel’s and Woodford Reserve), thinks, “This is probably the best time to be in bourbon since Prohibition.”

But not all bourbon is created equal. Or rather, not the same. Something that has a drastic affect on the end product is the yeast used to ferment the bourbon.

There are tons of bourbon yeast varietals — as with wine or beer — that produce very different liquors. Four Roses claims to be the only bourbon distillery that combines 5 proprietary yeast strains with 2 separate mashbills to produce 10 distinct bourbons. That’s a lot of numbers.

Regardless, though, every distillery needs yeast to ferment the bourbon, so let’s focus on some of the most popular strains: Q, K, F, O, V. 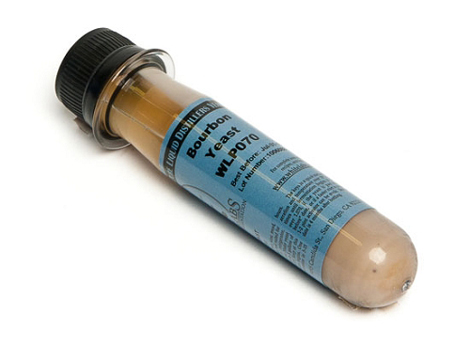 The yeast, again, like wine or beer, helps fermentation and significantly affects the final flavor profile of the alcohol. So, while most don’t speak of yeast strains in relation to their whiskey, it’s actually the critical element in the equation for a kick-ass bourbon.