Does This Bug You? Are Bugs for Dinner the Next Trend in Food?

You are here: Food 101 » Does This Bug You? Are Bugs for Dinner the Next Trend in Food?

This is a food trend forecast that may really bug you. Crickets and other insects are packed with protein, really good for you and are a very sustainable food source. These little guys are already being consumed by millions around the world and now, they are making their way to New York City restaurants. Already we’ve seen a few restaurants in Manhattan that have added these critters to their menus.

According to the Food and Agriculture Organization’s report released at a press conference in Rome, “the planet would be a lot better off environmentally speaking, not to mention more cheaply, safely and sustainably fed if more people incorporated locusts, beetles, crickets, grasshoppers, worms, grubs and the like into their meal routines.” The only issue here is people are grossed out by eating them (who doesn’t love a crunch and then a good squish?). If you’re brave enough and/or feel the urge to help out the planet somehow, here’s a few restaurants we’ve found in Manhattan that serve up some awesome bug dishes. Bug Appetit!

Grasshopper Tacos! Yup, you heard us correctly. This little place is in midtown and they have a menu item they call chapulines, they are 15 bucks and it is a dish composed of Oaxacan-style dried grasshoppers, onions, and jalapenos. 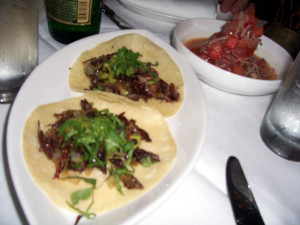 This is an eclectic place in Korea Town that has some awesome reviews. They serve cooked silkworm pupa as a dish on the menu. If you don’t have a clue what silkworm pupa is or what it tastes like then you should live on the edge and give this a shot. It’s actually a popular Korean snack consisting of silkworm pupa, boiled or steamed and seasoned and eaten for a snack. It’s traditionally called Beondegi in Korean, and we are told it’s really good for you. 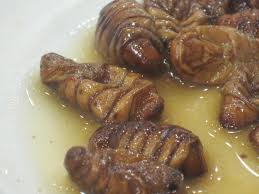 This is a Michelin Guide recommended Japanese restaurant in Korea town. With one of the largest sake selections in the city it is said to be “the” sake bar to go to in K-town. With all this sake, you might become brave enough to try some sauteed silk worms (it’s said they can give you beautiful skin by the way). Do ittttt. 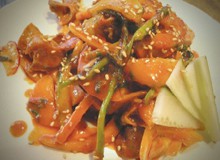 Hi! I’m Davina and I have an unquenchable passion for all things food, drink and real estate! I love practical jokes, coffee and my two pups. Follow me on instagram!