You are here: Best Of » 7 Best Rooftop Bars in NYC

Though the summer is done, we’ll be missing (and impatiently longing for) the best rooftops in the city. When winter is making us cold, and pale, and cold – Ugh – the mere thought of these scenes keep us serene.  We’ve got to motivate ourselves to get through January when candy canes don’t suffice. From happy hours to after hours, we’re taking the elevator to the top floor (one last time!) to drink and dine at these sky-high destinations. 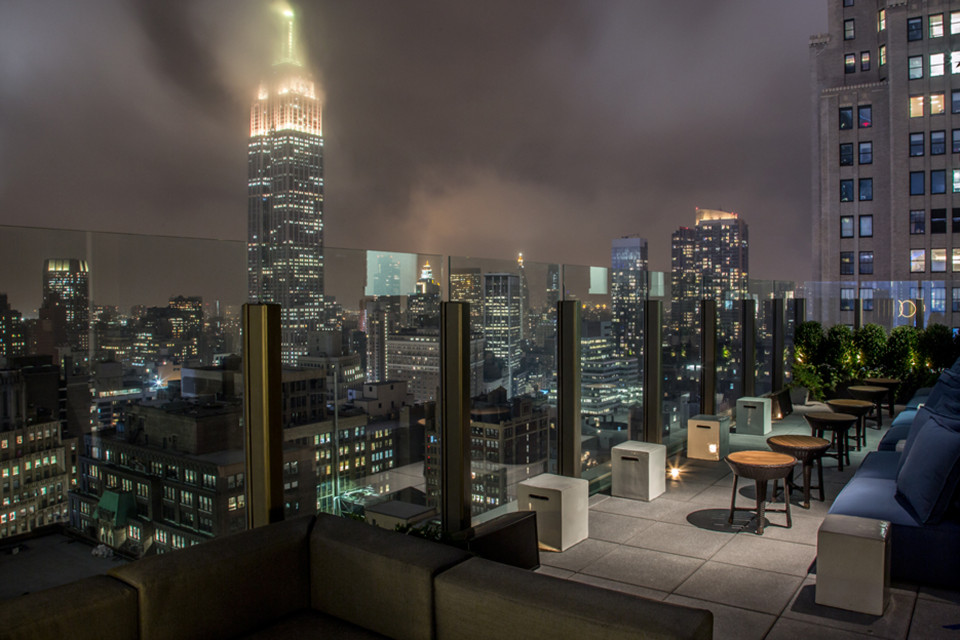 Oh, hello, Empire State Building. We would have been lying if we said we didn’t see you there. Ah, and Times Square too. Not a bad combo for a night out. On the 32nd floor, in-the-know New Yorkers (the fashion, media, entertainment and tastemaker-types) say cheers with a blue-hued martini, a.k.a. The Skylark cocktail ($18), in hand: Hendrick’s gin, Zu vodka, St. Germain, dry vermouth, blue curacao, grapefruit bitters, brandied cherry. Though the hustling busy-bodies are off to spin class in the morning, in the moment, they’re devouring Mac & Cheese Cupcakes with smoked tomato chutney and frizzled kale ($13) and Heirloom Tomato Pizzetta with fresh mozzarella, arugula, basil, and chocolate balsamic drizzle ($15). No judgement, SoulCyclers. We agree –totally worth it. 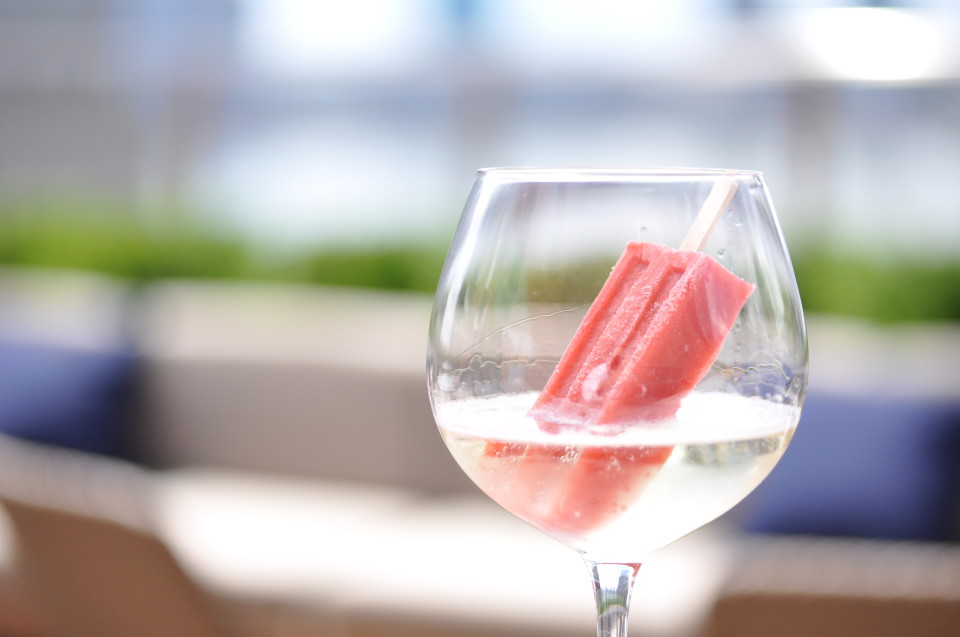 We’re team Prosecco – all the way, though it isn’t often we find ourselves in the Financial District for a glass of bubbly. Enter people’s pops, plus a roof, and a special trip is in order.  We’ll get in 20 minute cabs that cost more than our drinks (nope, not joking). On the 16th floor, watching the sun set on the Hudson River is second to (drum roll) the Prosecco & Ice Pop cocktail ($19) which combines an alcohol-infused ice pop in a large glass of Prosecco. Five flavors (always changing) might include: Blueberry Nectarine with Bacardi White or Peach-Basil with Campari. For snacking, go for the Sea Salt/Olive Oil Potato chips with a truffle parmesan aioli dipping sauce ($7.) 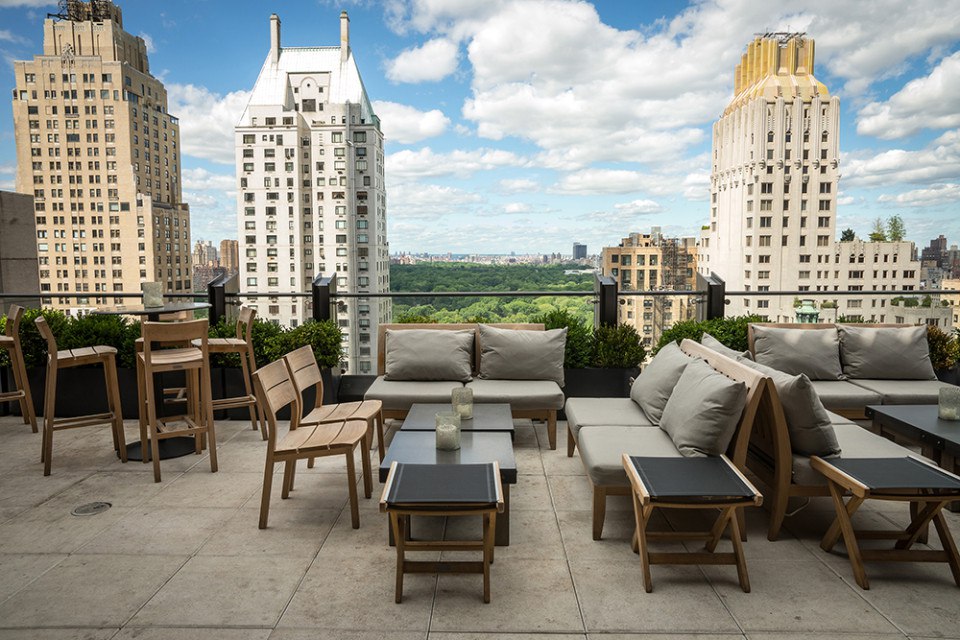 Crab toast ($18), Crispy Artichockes ($19) and a view of the city’s greenery. We want it all, and we get it all… here. The Roof faces Central Park and holds 120 of your best friends. Well, they will be your new BFFs after sipping a Spicy Paloma: a classic grapefruit paloma with a kick from Thai chili-infused Aperol ($18). If you’re not too busy taking pictures of your drink in the air, you might meet some hedgefunders, or the occasional supermodel. We’re neither, but we like pretty faces in new spaces (just opened this year). 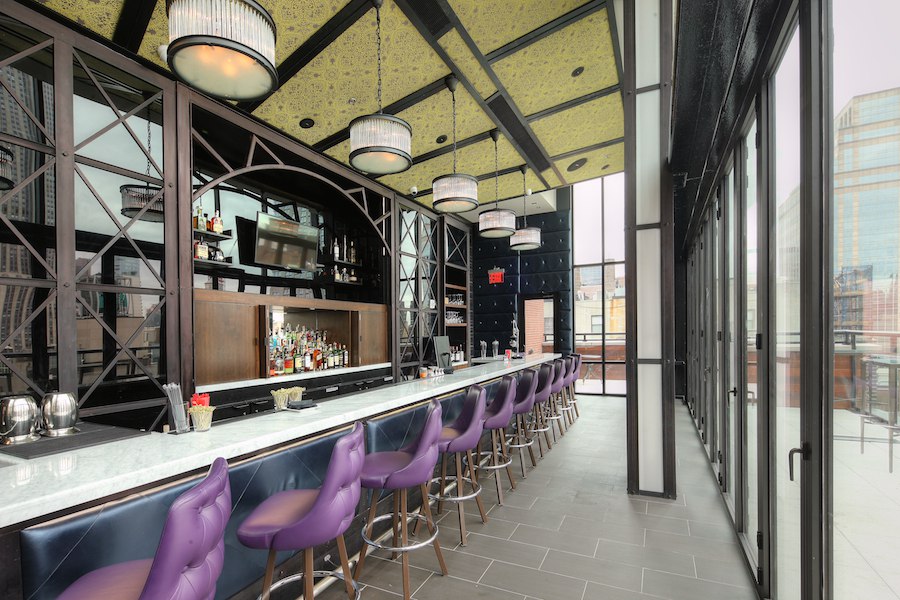 Brand spankin’ new for 2014, those looking for a relaxed rooftop vibe can pull up a seat at the bar on the 22nd floor while admiring the Empire State Building. If we’re drinking (which we are), it’s all about the You Look Smashing cocktail ($16): Bourbon, Mint, Blueberry and Lemon. Hey, we’re not going to turn down a compliment (wink!), but to be honest, we probably won’t look as sexy while scarfing down food by David Burke Fabrick, the restaurant in the hotel’s lobby. In conclusion: Lobster Dumplings ($16): fresh coconut puree, with green papaya and thai basil, and the Avocado Panna Cotta with blue corn tortilla chips, plantain chips and tomato pico ($16)… wait, nope. We have nothing more to say here.  Spyglass just won at life.

JIMMY at The James 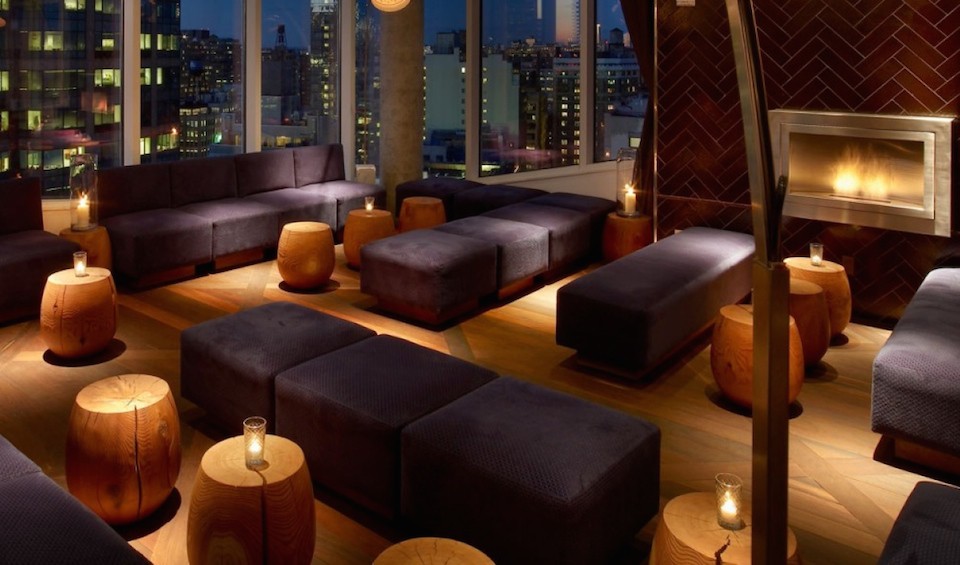 Nothing impresses New Yorkers. Nothing. But 360-degree views of Manhattan and a swimming pool? We give credit where credit is due. The mix of local downtown residents and eclectic visitors ranges from 20-somethings to 40-somthings — but always good looking. Hey there! Grilled Pineapple Mojitos ($18): Caliche Rum, grilled pineapple, mint, and lime, and Grapes of Wrath ($18): Crop Organic Cucumber Vodka, St. Germain, Green Grapes, Seltzer, and Rosemary are the signature drinks. But drinking on an empty stomach isn’t cool, so you might as well dig into the David Burke Kitchen offerings like Tuna Tartare Tacos with avocado and tobiko ($17) and the Kobe Franks in a Blanket with honey mustard ($16). Pool, food, drinks, and 120 pretty people. Can we just live here? 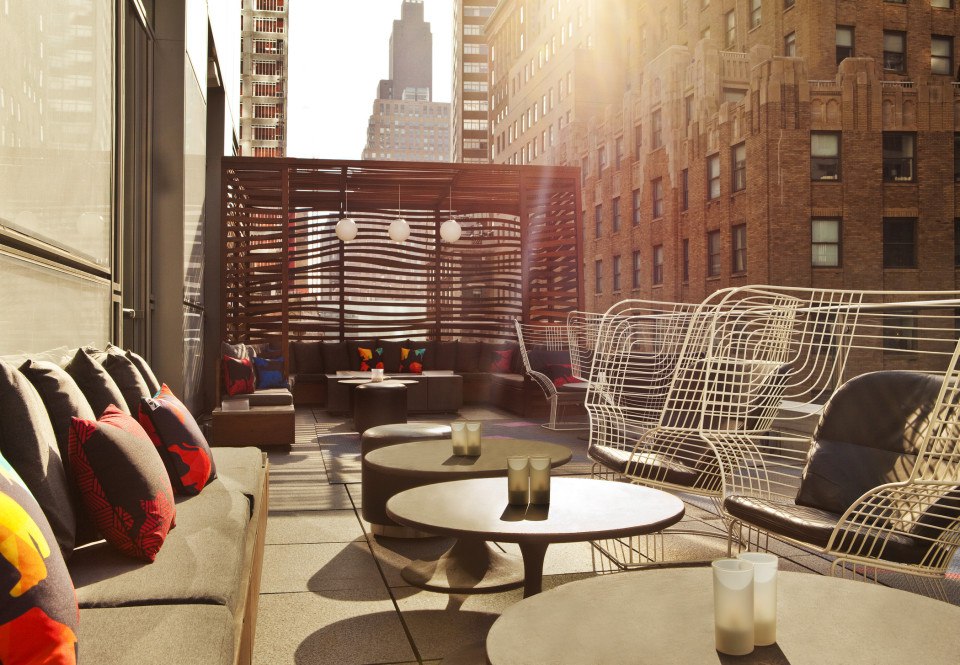 When we go to any W Hotel in NYC, we feel energized – yes, even in Financial District where things aren’t always poppin’ (pretty sure that’s what the kids are still saying these days…). Among finance guys grabbing a drink, there are some tourists checking out the Freedom Tower and 9/11 Memorial (but, hey, we’re looking too). Still thankful it’s not winter, we dig the Yankee Clipper: bourbon, slow gin, orange marmalade and the Great Harbor: orange vodka, guava and Aperol ($14-$16). And we’ll take that with a side of Grilled Spicy Octopus with lemon potato salad ($14), thank you very much.

Refinery Rooftop at The Refinery Hotel 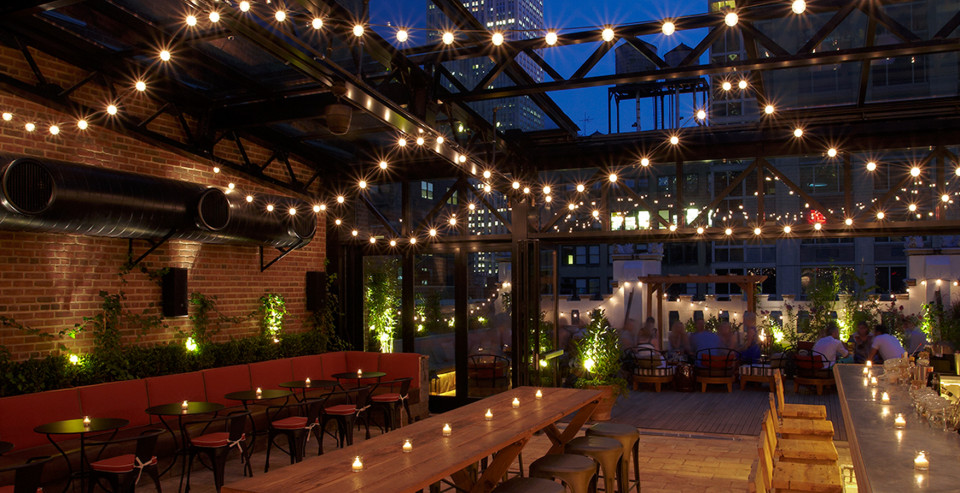 The work crowd relaxes in unison, flowing in from the Garment District and Times Square, during the week. But, on the weekends, the chic party-going crowd takes over. Both groups agree that the Blood Orange Margarita ($14): Don Julio, Cointreau, Blood Orange Puree and Lime or the Baby Doll ($16): Grey Goose, Fresh Watermelon, Lemon, and Pineapple, are must-orders. All of the flatbreads are delish – but if you’re in the mood for a classic, go for the Margherita ($13): fresh mozzarella, basil, tomatoes and parmesan… all while listening to live jazz (or local DJs) Thursdays through Saturdays.

Did we miss your favorite sky bar or restaurant? Think ours aren’t tall enough? Let us know in the comments!

Hilary Sheinbaum is a University of Florida graduate and Writer/Reporter/Blogger/Person.

Hilary has contributed to dozens of publications including USA TODAY, Marie Claire magazine, ELLE.com, The Village Voice, amNew York and MensFitness.com. She writes about entertainment, food and beverage, love/dating and beauty.

She has been featured on FOX News, HuffPo Live, PIX11 News, StyleBlazer.com and People.com as a Lifestyle and Entertainment Expert.