Fashion Week is Over, but for Foodies, Fashion is Just Getting Started

You are here: Food 101 » Fashion Week is Over, but for Foodies, Fashion is Just Getting Started

Here at ForknPlate, we’re always eager to bring you the new, the tasty, the talked-about when it comes to New York City’s culinary scene. But food, and our fascination with it, extends far beyond our favorite lunch spots and cocktail bars. And though often food can be presented in such a beautiful way, we would call it art; in fact food has reached past the plate and influenced the world of art, fashion, and music. We’re not just talking about the occasional food-product based challenge on Project Runway (but come on, those are always the best episodes. Who doesn’t want to watch a bunch of poor, tired designers tear their hair out trying to make a dress out of corn husks or some such nonsense?), but designers making new, interesting, and certainly intriguing food-based work out in the real world. There are a surprising number of them –like Onch Movement who makes necklaces that look like neon pieces of fried chicken for the likes to Niki Minaj, to Franc Fernandez, designer of Lady Gaga’s infamous meat dress, even as far back as the 1920s when Josephine Baker rose to fame with her banana skirt –but check out the list below for a few of our favorites. 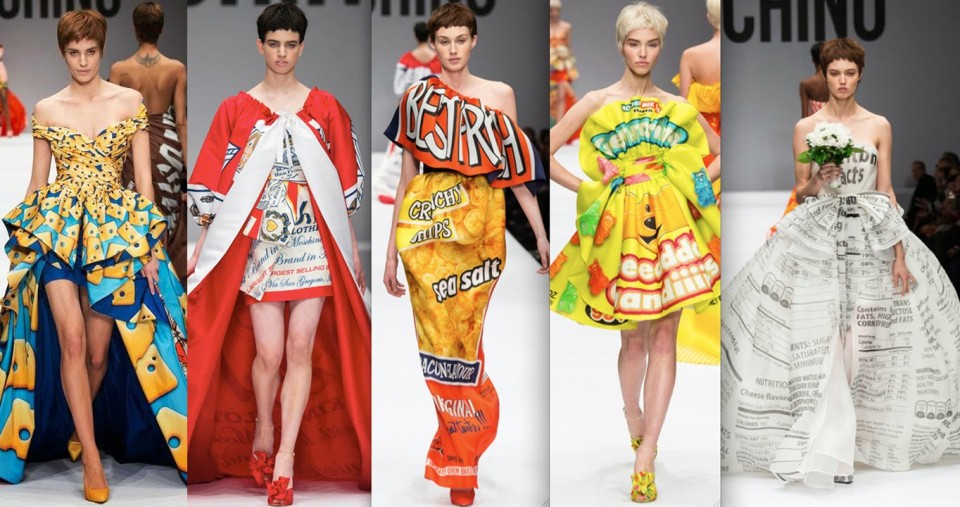 American designer Jeremy Scott has been known for his colorful, cartoonish, and often outlandish clothing since the 1990’s. His designs have been worn by countless celebrities, and he’s also designed plenty of costumes for music videos and live performances (Katy Perry’s recent Superbowl half-time show being some of his most recent work). He’s dabbled with food prints –like a brightly colored design with sprinkles and cartoon character donuts all over it. As well as multiple collections with culinary inspiration –like his “Food Fight” collection featuring dresses the looked like pizza and ice cream, and most recently his collection for Moschino in which the clothes were inspired by fast food and popular brand names. 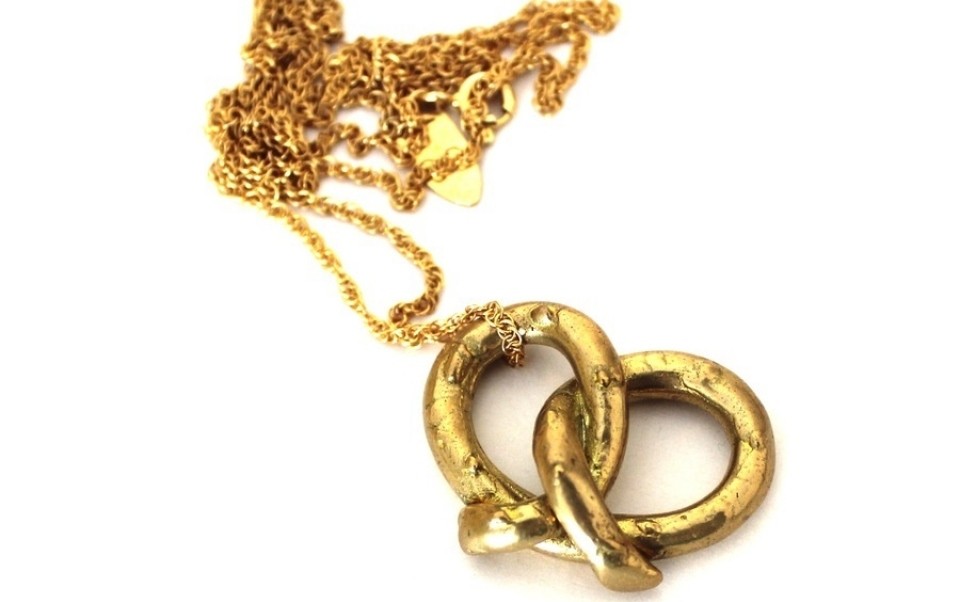 On the arguably more tasteful and certainly more subtle end of the food-as-fashion spectrum lies Vera Meat. A New York City based jewelry designer, she lends a whimsical touch to classic gold, silver and copper jewelry with pieces featuring anything from dinosaurs to switch blades to baby heads (yes, you read that correctly, baby heads). So, of course, it stands to reason she’d pull inspiration from the culinary world for some of her designs, which range from almost classic (a simple pig on a gold bangle) to wonderfully weird (the dino eating fried chicken ring). And best of all, those of you located in or near New York can check out her work at one of multiple shops in the area (though you can also buy her designs online). 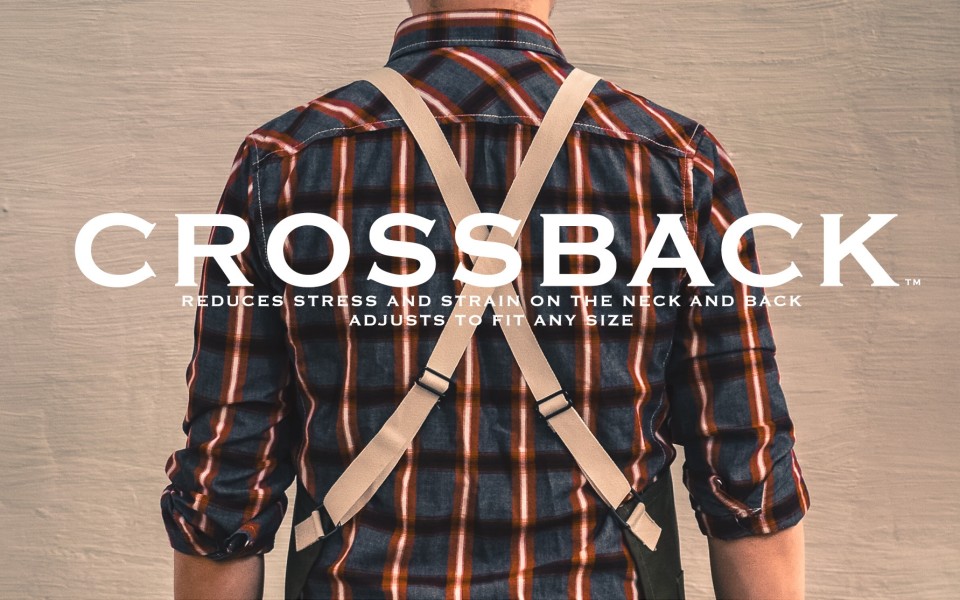 So we’ve seen how some designers use food for their fashion, but what about turning that around a bit and using fashion to help out those who make food?  Chefs work hard to create food that is both tasty and beautiful, but that doesn’t mean they have to look like schlubs, relegated to the fashion corner filled with white aprons and weird french hats (google image search “chef” and you’ll see what a sad state of affairs we’re in). So Corey Fair, a chef himself, decided enough was enough and used a successful indiegogo campaign to fund Butcher and Baker, a company dedicated to producing stylish aprons, work shirts, and knife rolls for the chefs of the world (and, in the case of the knife rolls, maybe the occasional Dexter) while supporting American craftsmen. Pretty cool. Plus, they’re stuff is so good looking, it makes me really want to own a knife roll… not sure what I’d do with it, but I would look pretty damn cool with one. 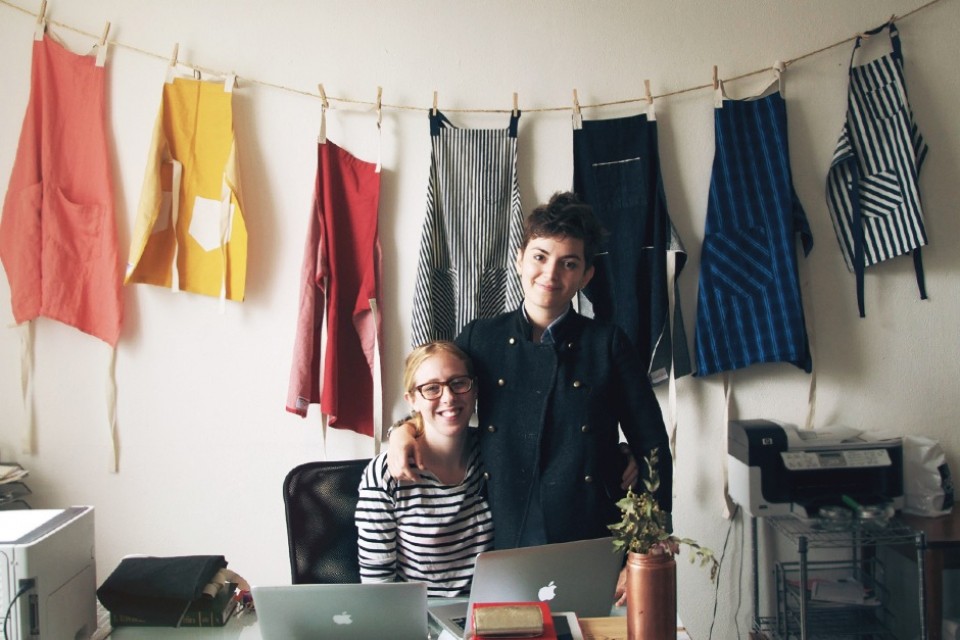 Another food-fashion luminary breaking the mold of the ye-old-boring-apron, is Los Angeles based chef, Ellie Bennett. She makes each of her aprons by hand, and they come in a range of bright colors, classy patterns, and natural fabrics. Bonus: they’re also fully customizable. Since each is made to order, you can basically design the apron of your dreams –one that fulfills the functionality you need, but also looks really nice. Alton Brown is a huge fan and even worked with Bennett on a design called the Dearborn Ave. She has also expanded her business to include more than aprons. Check out all her stylish, functional products on her site. 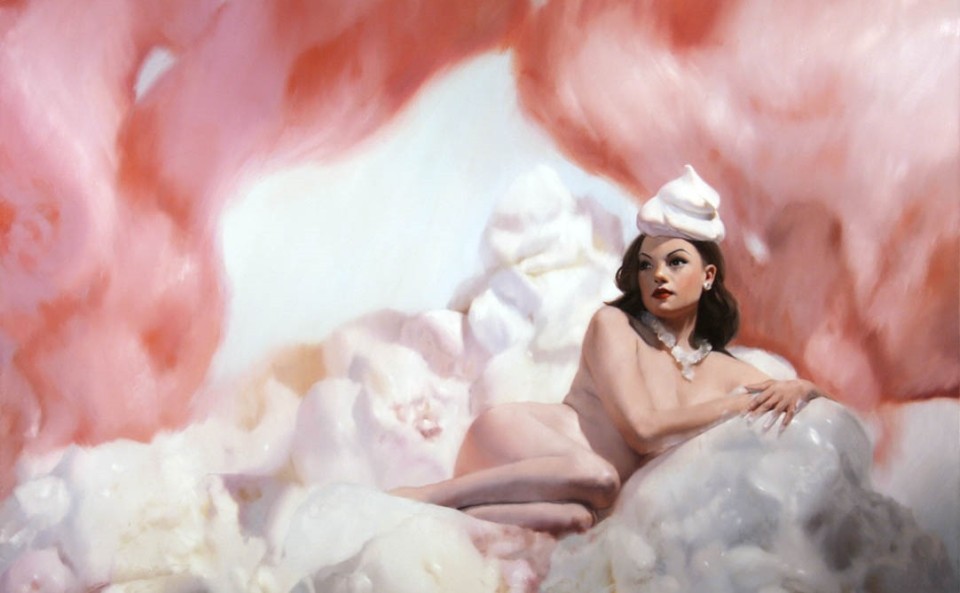 It would be wrong to say Will Cotton is a fashion designer who heavily utilizes food in his work. It would be much more accurate to say, “Will Cotton is a painter/sculptor/chef/costumer/performance artist/fashion designer who heavily utilizes food in his work.” It’s a bit of a mouthful, but let’s say that. Cotton is known for his fantastical paintings of beautiful women engulfed in sugary sweets –whether they’re lying on clouds of cotton candy, or wearing headdresses of colorful macaroons. Imagine Candyland exploded all over a canvas, that’s basically the idea. However, he doesn’t just paint whipped cream landscapes, he has expanded his unique work to many different mediums, including designing the music video for Katy Perry’s “California Girls,” and Elle Fanning’s sugary sweet spread for Vogue. He’s even had his own pop-up art gallery/pastry shop where customers could enjoy the taste and smell of his own confectioneries while looking at his equally delicious art work. He is, quite possibly, the coolest dude ever. Check him out.

Do you know of any other food fashion designers? Or designers of food as fashion? Maybe a guy who makes kitchen fixtures out of Twizzlers, or a gal who designs edible raincoats?