Peanut Butter: Not Just for Dessert and Celery Slices

You are here: Food 101 » Peanut Butter: Not Just for Dessert and Celery Slices

Peanut Butter gets a bad wrap. Ok, that’s not really true, peanut butter is greatly loved. (At least it is here in America. Europeans are still pretty confused about our nutty obsession.) However, it is true that peanut butter is often relegated to the realm of dessert, hidden away inside brown paper bag PB&J’s, or foisted upon children with ants on a log, a (relatively) healthy snack they’ll actually eat. But, guys, peanut butter is so much more! Not only can it be used in more complex ways in sweet foods, but it’s a great staple of a multitude of savory dishes as well. Think about it –it’s peanuts, salt, and sugar combined. Savory, Salty, Sweet. All of the tastes (umami doesn’t count right now). It can do no wrong. To prove it to you, let’s go on a peanut butter adventure –peanut butter for every meal of the day. No PB&J’s allowed. 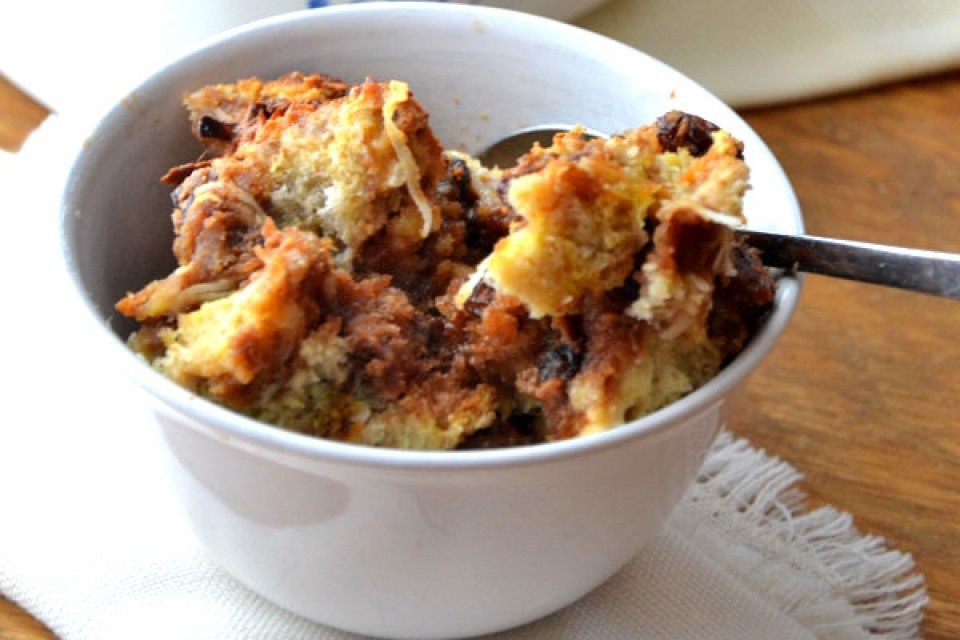 For breakfast, it’s easy to go the spread-peanut-butter-on-an-eggo route, but why not move up a level or two on the adult scale and start your day with a warm, flavorful bread pudding (bread pudding always sounds so grown-up and fancy; really its just ooey-gooey cake for breakfast. Woohoo!). This recipe already has plenty of awesomeness going on, but you could also add chocolate chips, fruit preserves, sweet potato or pumpkin puree, or any other bright idea that pops into your head. And best of all, you can cook one batch and it’ll last you the whole week. Warming something up is even easier than making waffles in a toaster. So what are you waiting for!

2. Break bread into small pieces into the pan.

4. Add shredded coconut, banana slices, eggs, almond milk and peanut butter; gently toss to combine and lightly push down until bread is completely saturated (but don’t worry about it all being equally blended together, this is a messy kind of recipe). 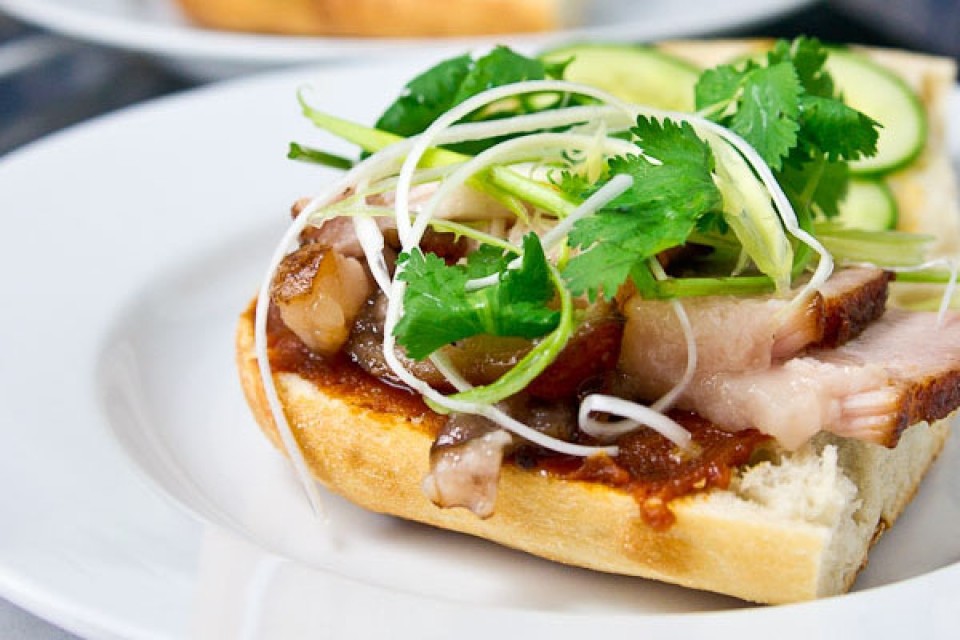 Ok, now it’s lunch time. Boring, regular you reaches for that peanut butter and jelly sandwich you threw in a paper bag. Now, I’m not about to knock a good ‘ol PB&J, but there are so many quick, easy plays on the classic staple, there’s no excuse for no spicing up lunch. You could make it with french toast instead of plain white bread, or better yet, use a crepe. And let’s not forget the classic Elvis –a peanut butter, bacon, and banana sandwich. You could even try a lettuce, mayo, and peanut butter ‘wich, which I’ve heard is actually weirdly good, but I’m not sure I believe it. However, just for the heck of it, let’s say we’re cooking lunch for ourselves today, and we’re looking to try something a little different. How’s a spicy peanut butter pork belly sandwich grab you?

1. Sprinkle all sides of the pork belly with the cinnamon and Chinese five spice powder.

3. Add the garlic to the pan and brown.

4. Add the cooking wine, and allow it to cook until the alcohol is boiled off.

5. Add the soy sauce and hoisin sauce and cook until it’s thick.

6. Put the pork belly back in the pan and coat all sides of the meat with the sauce. Cover with a lid and put it in the oven at 275° F for 3-4 hours. Flip the pork at least once while it’s in the oven. After it’s cooked through, transfer the pork belly to a plate.

7. Skim the fat off of the braising liquid and boil over medium high heat until the sauce is thick.

8. Add 3 tablespoons of the braising liquid to a small bowl with the peanut butter and stir to combine.

9. Once the pork has cooled enough to handle, slice into 1/4” thick pieces. 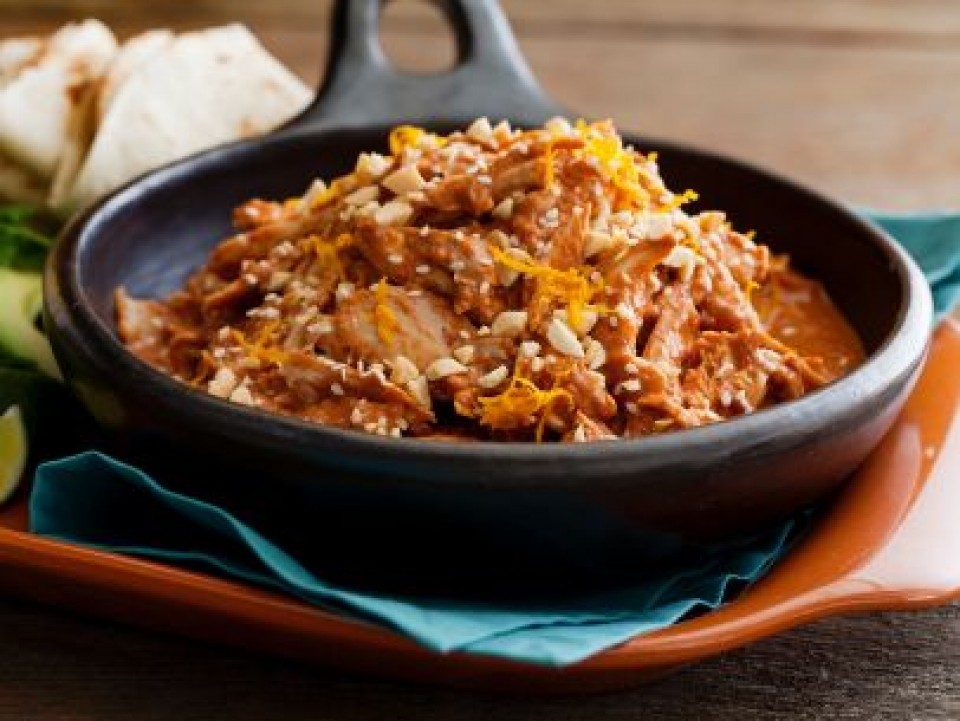 Now when you say chocolate and peanut butter, a reese’s cup usually comes to mind. But hang on there, eager beaver, it’s not dessert time yet. Let’s do dinner, how’s mole sound? Mole is a traditional Mexican sauce that is spicy and savory but incorporates lots of typically “sweet” elements, like chocolate, honey, raisins, cinnamon. So naturally peanut butter is a great addition, it adds creaminess to the sauce, and the sweet/salty/savory complex of the peanut butter is a perfect compliment to mole’s more traditional ingredients.

1. Place a pot over medium heat and coat with the oil.

2. Add the onion and garlic, stir until fragrant.

3. Add the chipotle with adobo, raisins, and tomatoes. Stir. Bring to a simmer and cook for 10 minutes.

4. Pour the mixture into a blender. Add the peanut butter, broth, chili powder, and cinnamon. Puree the mixture until smooth.

5. Season with salt and pepper.

6. Return the mixture to the pot over medium heat. Cook for 15 minutes, stirring occasionally.

7. Add the chocolate and stir until melted.

8. Add the shredded chicken and heat through.

9. Transfer the mole to a serving dish and garnish with peanuts, sesame seeds, and orange zest. Serve with cilantro, lime, avocado, and tortillas. 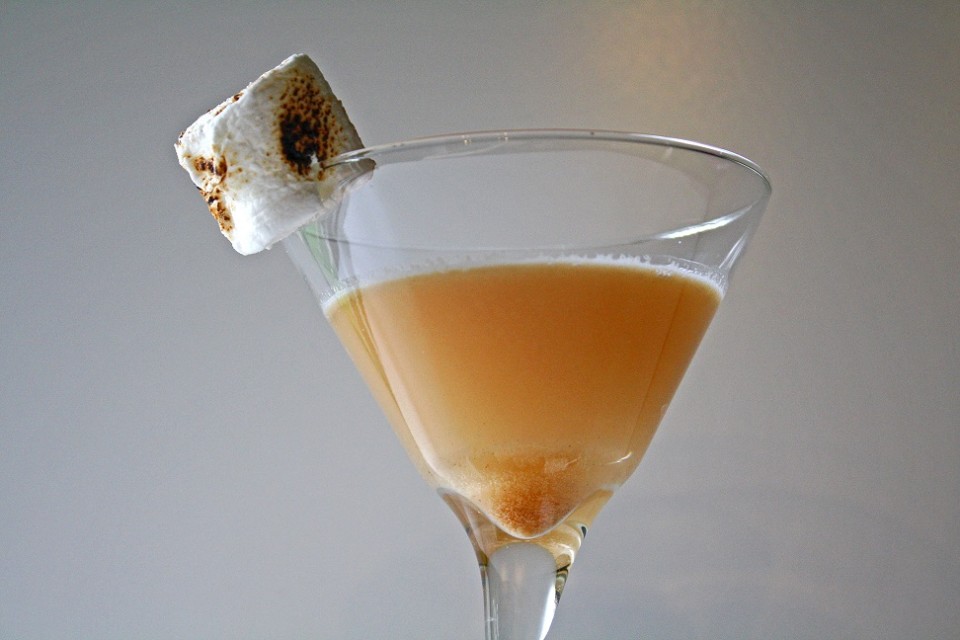 Congratsulations! You’ve reached the end of your day. And though it’s been a great one, due in no small part to the copious amounts of peanut butter you’ve consumed, you still deserve a drink to take the edge off. Now if PB&J is just too darn healthy, what with that miniscule amount of fruit hidden in there, why not try a fluffernutter cocktail.

1. In a medium saucepan over medium heat, combine the sugar, water, and peanut butter.

2. Whisk until fully combined and no sugar granules remain.  Set aside to thicken and cool.

3. In a shaker filled with ice, combine the vodka, liqueur, and peanut butter simple syrup.  Shake and pour.

4. Garnish with marshmallow perched on rim.

Sadly our peanut butter day has come to a close. But, luckily, there are endless recipes that use peanut butter in new, interesting, often tasty, sometimes bizarre ways. So, you’ll have plenty more to try tomorrow. What’s the craziest peanut butter recipe you’ve ever encountered? Was it good, bad, or somehow both?