You are here: Food 101 » Potatoes: The Ultimate Guide

Ever wonder why the leftover Idaho bakers that tasted great last night taste awful reheated? Or what potato will make the best hash browns? Here are the answers to your questions and more.

Stores offer a bewildering variety of potatoes, making it hard to know which to buy. Ultimately, though, all potatoes fall into one of three categories –high starch, medium starch, and low starch and it’s the starch level that determines how the potato is best used.

Potatoes with a high starch content are often described as “floury” or “mealy” –not very appealing, but these very qualities make high-starch potatoes perfect baking, or any dish that requires light, fluffy flesh.

Despite their popularity, high-starch potatoes are not good for every dish. They become water-logged and disintegrate in recipes that must be simmered or boiled, making them unsuitable for soups and stews, and their easily broken flesh makes them wrong for potato salad. Their other drawback is that they must be eaten soon after cooking, as the starch changes both the taste and the texture of the potato when it cools or sits too long.

There is no specific variety of “Idaho” potato, but the name is often used because that’s where the majority of brown-skinned Russets are grown. In America, this the high-starch potato, and the country’s all-round bestseller. In addition to baking, they make excellent mashed potatoes because their cooked flesh breaks apart easily, whips to lump-free perfection, and absorbs milk and butter well. Because they are drier than other potatoes, they also make crisp, light French fries. 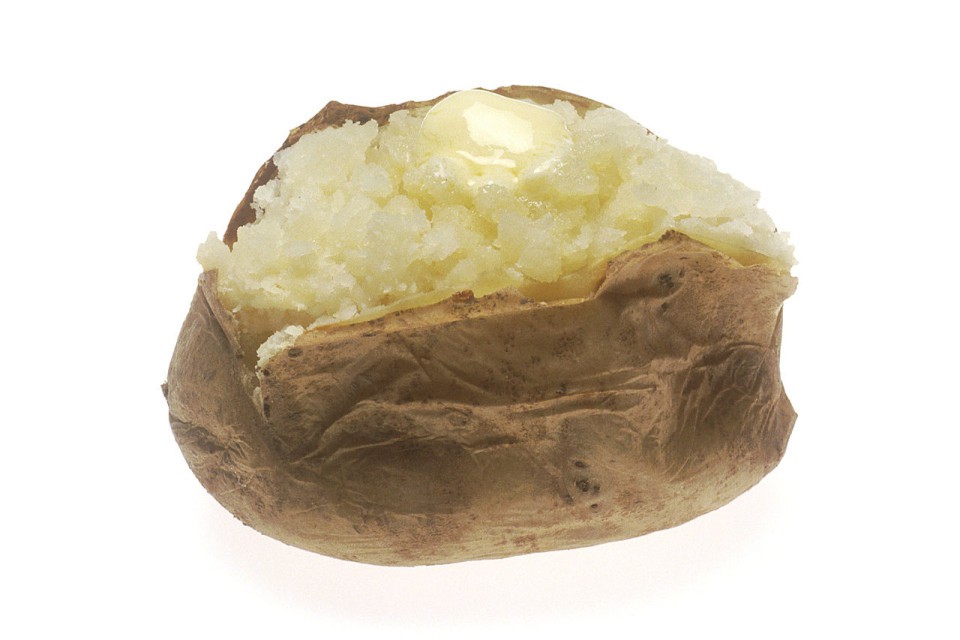 All Blue and Purple Peruvian Potatoes

Though the idea of blue- and purple-fleshed potatoes has yet to trend, these varieties are beginning to catch on. Their color, which does not fade when cooked, comes from the fact that they are high in flavonoids, a beneficial anti-oxidant. They are good for all the dishes Russets are and, due to their color, make dramatic fries and chips. Note that, though all blue and Purple Peruvians belong to the high-starch category, hybrids that fall into the medium-starch range have recently come on-line. 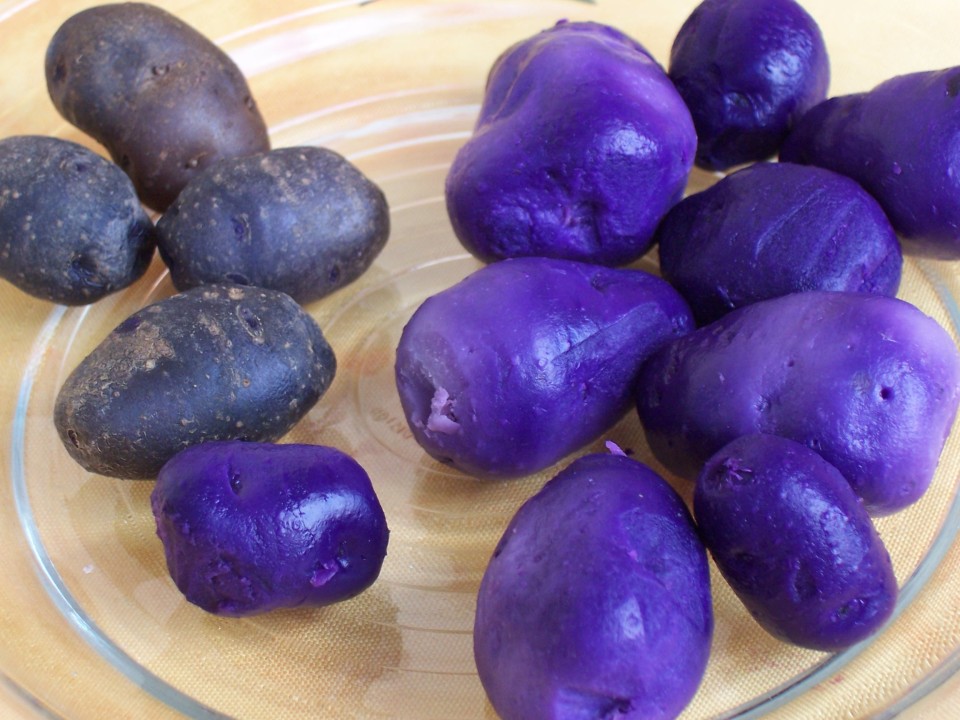 Often referred to as all-purpose potatoes, the several varieties in this class adapt to the widest number of cooking methods. They hold their shape better than high-starch varieties and their flesh is moister, making them perfect for roasting in the oven. The most common varieties of medium-starch potatoes are:

White Potatoes can be either oblong or round and are the most versatile variety of potato. They are extremely flavorful and perform well when baked, mashed, fried, or roasted, and hold their shape in stews or soup. Unlike high-starch potatoes, they can be reheated without loss of flavor or texture. In fact, leftover white potatoes are a wonderful resource –leftover roasted potatoes are excellent fried or in a hash, while leftover mashed or whipped are used in potato pancakes or as topping on shepherd’s pie. 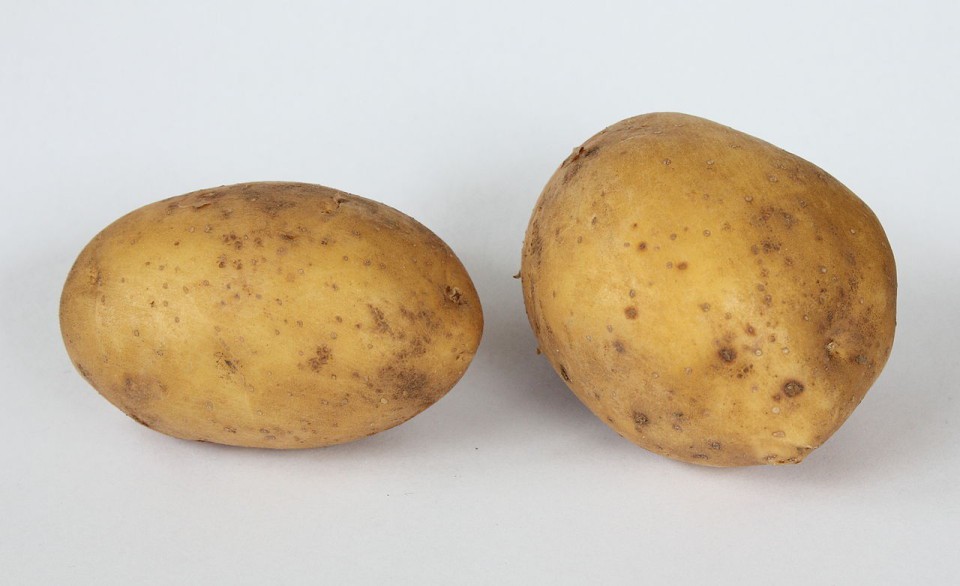 Yellows took America by storm in the 1980s, with the arrival of the Yukon Gold, which is now the reigning yellow. With thin skin and buttery flesh, the Yukon becomes flaky and somewhat starchy when cooked, making it good for mashing, yet it is still firm and waxy enough to hold it’s shape when shredded, simmered, or boiled. Though harder to find than Yukons, Yellow Finns are considered by many the tastiest of the medium-starch all-purpose potatoes. They are less starchy when cooked and have a creamier texture than Yukons, making them a good for roasting or for scalloped and au gratin potato dishes. Some cooks combine Yellow Finns with an equal amount of Russets for a best-of-both-worlds mashed potatoes. 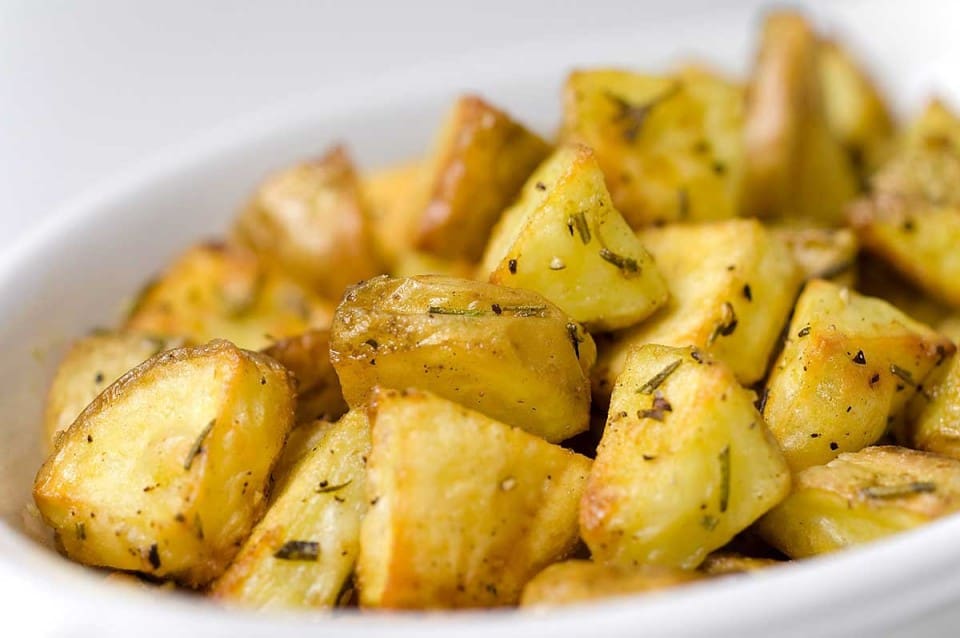 Both of these all-purpose potatoes are hybrids with a lower starch content than traditional blue and Peruvian potatoes. They retain enough starch to be suitable for baking or mashing, but are at their best roasted, in soups, or mixed into a potato salad. Both are oblong-shaped with purple skins, but the flesh of the Adirondack Blue changes from purple to blue when cooked. Both varieties colors fade when steamed or boiled. 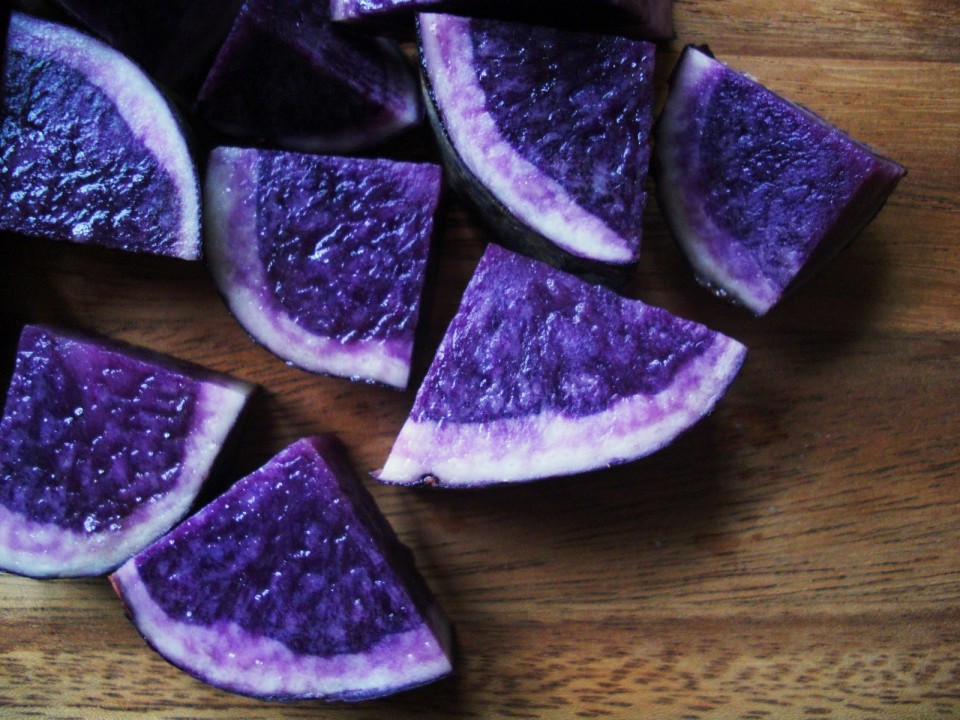 Often described as “waxy,” low-starch potatoes are best for dishes that call for potatoes to hold their shape, such as parsley buttered potatoes, potato salads, and in soups and stews.

“Red potatoes” is a generic term for several varieties of red-skinned potatoes. Together, they form the most common of the low-starch potatoes. Leading varieties include Red Bliss, Red La Sofa, Chieftan, Red Pontiac, Dakota Rose, and Nordland. Their thin skins, which are edible, needn’t be peeled, and retain their red color when cooked, make them especially popular for use in potato salads. 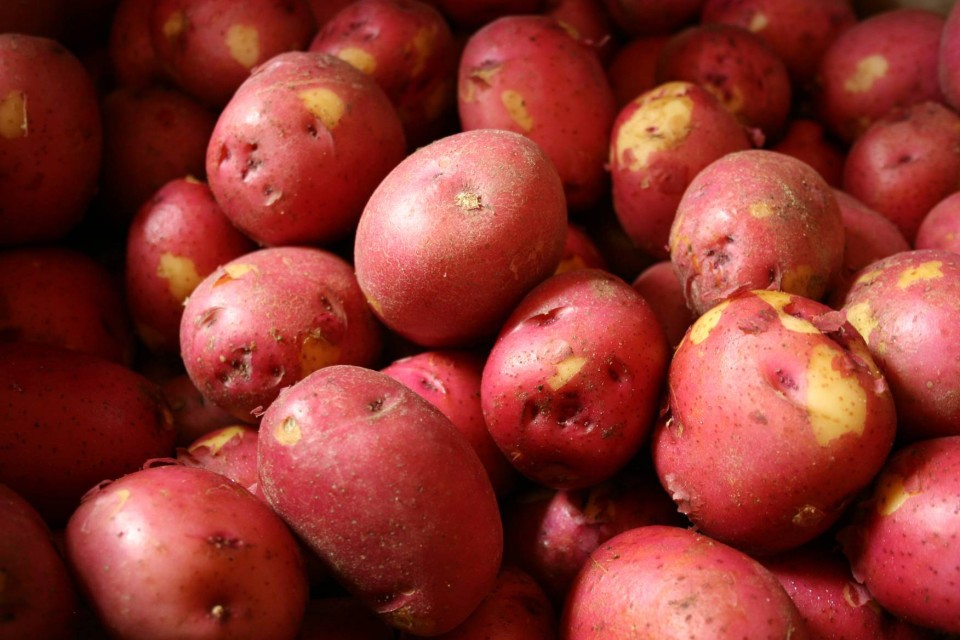 Fingerlings are shaped like a short, chubby finger. Because they are only two to three inches long, people frequently mistake them for new (baby) potatoes, but this is not the case –Fingerlings are fully mature when harvested. There are many varieties of Fingerlings, the most common being the Russian Banana, Butterfinger, French Fingerling, and Purple Peruvian Fingerling. Because they are cultivated as an heirloom potato, they are considerably more expensive than most other potatoes, and it would be something of a waste to use them in a potato salad. The best way to enjoy them is roasted, grilled, or sautéed with their skins on. Because Fingerlings are low in starch and eaten in smaller quantities, many people consider them a healthier way to get their potato fix. 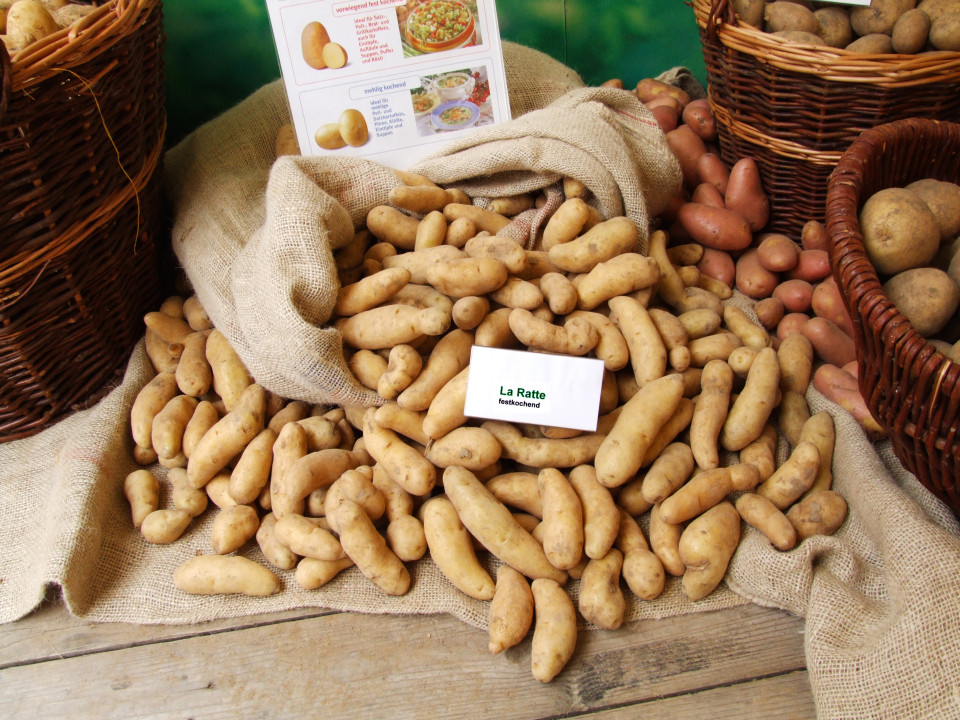 “New potatoes” refers to any variety of potato harvested before it is mature. Although they reflect the characteristics of their parent variety, new potatoes are invariably tenderer and sweeter than mature potatoes, because the sugar in them has yet to convert to starch. The paper-thin skins are left on for cooking, which makes them especially easy to prepare. Roasting with herbs and garlic is an especially popular way to serve new potatoes, as is serving them creamed with fresh peas or simply steaming or boiling and serving them with butter. 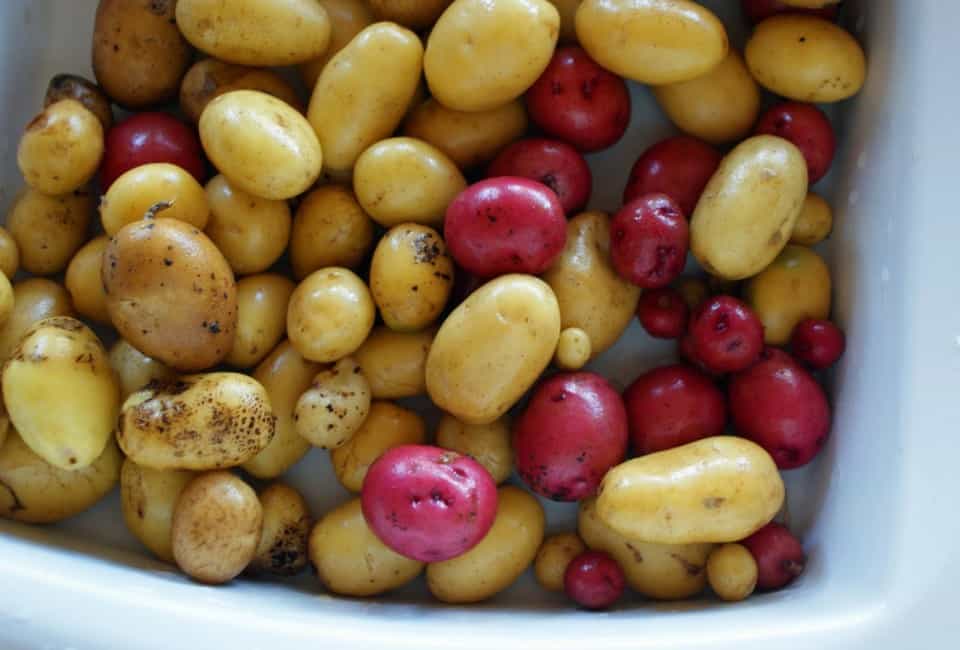 Just as you’ve always suspected, Sweet Potatoes aren’t even remotely related to the other potatoes we know and love. They are from completely different families, and standard potatoes are closer to eggplants and peppers than they are to Sweet Potatoes, which are from the same family as vining morning glories. Unlike the leaves of potato plants, which are toxic, the leaves and shoots of Sweet Potatoes are edible and nutritious. So why do we call them potatoes? Their similar size and shape may have something to do with it, but the more likely the answer lies in the word “sweet.” As vegetables go, both are relatively carbohydrate rich, making the Sweet Potato the potato’s equal when it comes to baking, mashing, frying, and other traditional potato dishes. 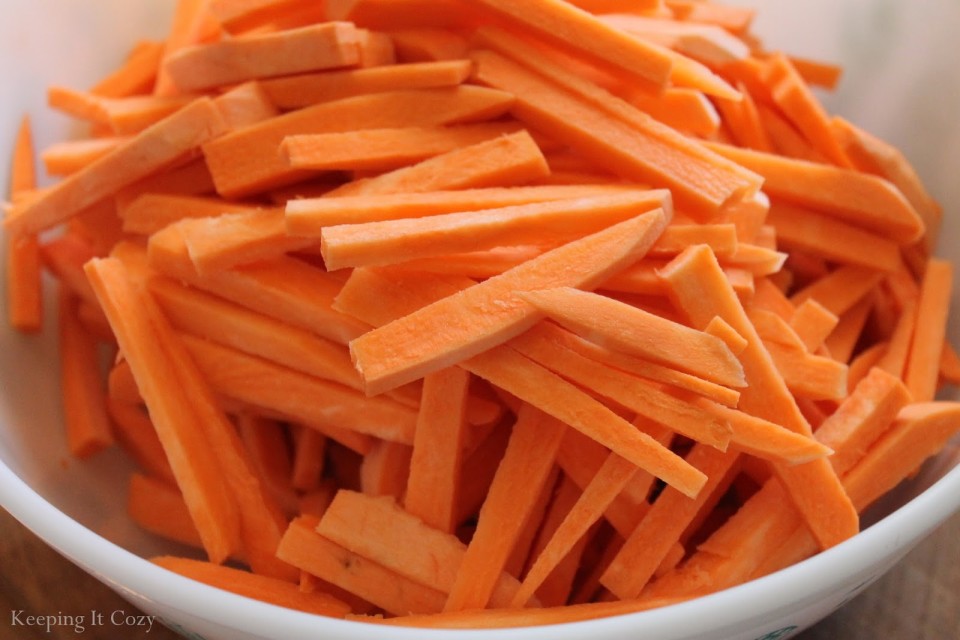 And in case you still think potatoes are indulgent comfort food, think again. One medium potato has just 110 calories, contains neither fat nor cholesterol, provides almost half your daily recommended vitamin C, and has more heart-healthy potassium than a banana, and has a high-fiber skin. So eat up!