Add to the list of rapidly-vanishing New York establishments the walk-in souvlaki shops that used to be everywhere. Yes, there are places to buy souvlaki — food carts, Astoria, Queens and Manhattan’s Ninth Avenue, but it seems wrong that you can’t dash out for a midnight kebab without whipping out a MetroCard or hailing a cab. In a fit of nostalgia, I’ve found myself longing for the comeback of these sharp, tangy grilled treats.

Souvlaki is the Greek version of the Middle Eastern kebab, made of meat – or sometimes fish – marinated in lemon juice, olive oil, garlic, oregano, salt and pepper and grilled on skewers. Unlike a kebab, which is traditionally lamb, souvlaki tradition calls for pork, especially in Greece and Cyprus. However, since souvlaki has become a popular fast food made with customers in mind, chicken, lamb, swordfish and vegetarian versions are not that hard to find. 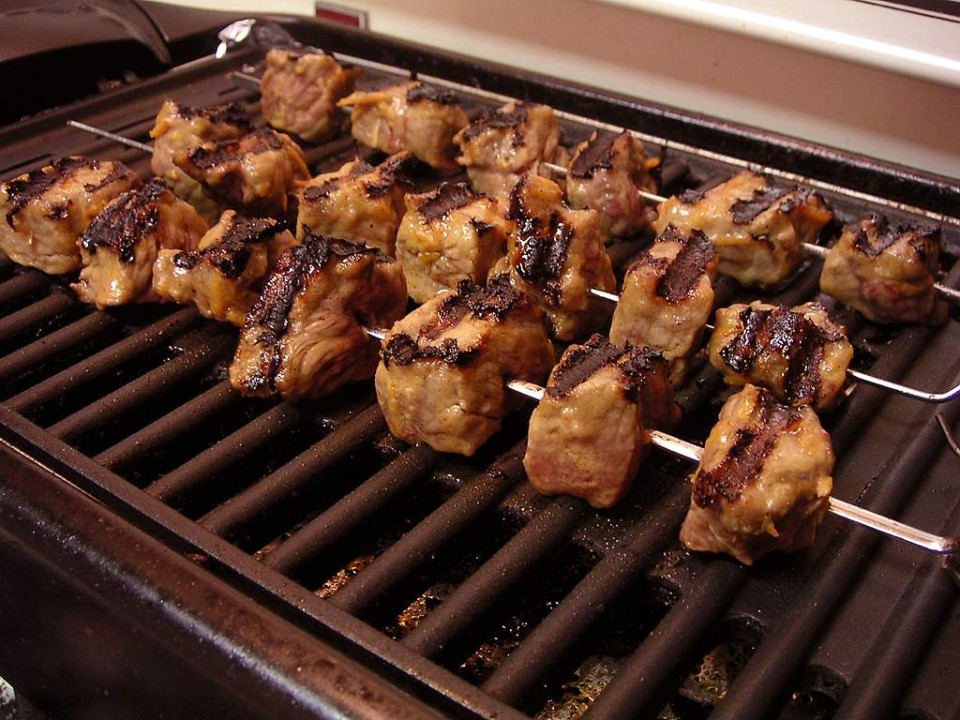 Tomatoes, onions, cucumbers and peppers are traditionally served as part of the dish, either fresh on the side, grilled on the side, or threaded onto the skewers and grilled with the meat. Tzatziki, a cold sauce of yogurt, cucumber, garlic, dill and lemon juice is also a traditional accompaniment. Souvlaki is almost always served with grilled pita, and often all the ingredients above are served in a fold of pita. Though sometimes this sandwich is referred to as a gyro or souvlaki gyro, “gyro” actually refers to a massive roast cooked on a slowly-turning vertical spit, then thinly sliced and served in pita.

Souvlaki is considered a Greek food, and historians cite references to the dish in the writings of Aristotle (384-322 BC), Aristophanes (446-386 BC), and Homer, their senior by 400 or more years. The fact is, souvlaki was over a millennium old by the time Homer came along.

From 1450 to 1100 BC, Minoan culture, based on Crete, dominated the southeast Aegean Sea and was the most advanced civilization in the Mediterranean. A major outpost was Akrotiri on Santorini, some 90 miles north. Somewhere between 1645 BC and 1500 BC, a massive volcanic eruption sent the center of the island into the sea and buried Akrotiri under layers of ash and debris.

Minoan civilization went into decline and was gradually absorbed into what eventually became Greek culture. It’s now thought that Plato, writing about Atlantis a millennium later, was referring to legends that grew out of the Santorini explosion. Akrotiri was unknown until 1867, and modern excavation did not begin until 1967. Among the numerous artifacts found there were racks clearly intended for grilling skewers of meat over heated coals, proving that souvlaki dates back at least 2,500 years and is probably much older. 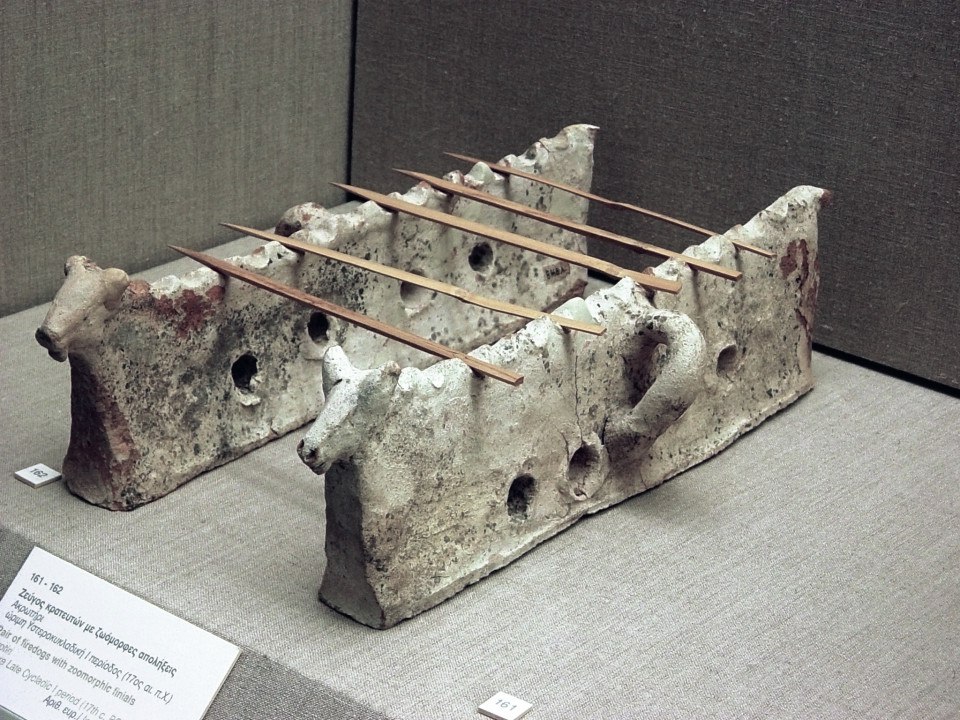 Souvlaki shops began appearing in Greece in the early 1950s and quickly became the reigning fast food of the region. The dish was introduced to America by immigrants who arrived in the early 20th century, many of whom were restauranteurs who settled in New York, Chicago and other urban areas. Souvlaki and all things kebab got another popularity boost when suburbs, patios and backyard barbecuing reshaped American culture and cuisine in the postwar years.

How To Make Souvlaki

Souvlaki is a snap if you have access to an outdoor grill. Since the marinade and method are the same no matter what meat you’re using, all you need is hot coals and a good souvlaki recipe. For those of us in city apartments, it’s a bit trickier. In fact, writing this article left me in such a state of souvlaki longing that I set out to see if I could make a reasonable indoor chicken souvlaki that wouldn’t set off my smoke alarm.

How to Make Souvlaki Indoors

To make souvlaki indoors, I immediately ruled out the broiler as too smoky. I also dispensed with the idea of skewers, which would be an awkward fit for my frying pan. What I did use, and what I highly recommend is a gas stove, a cast iron frying pan, and a cast iron griddle large enough to set on top of the pan like a lid. 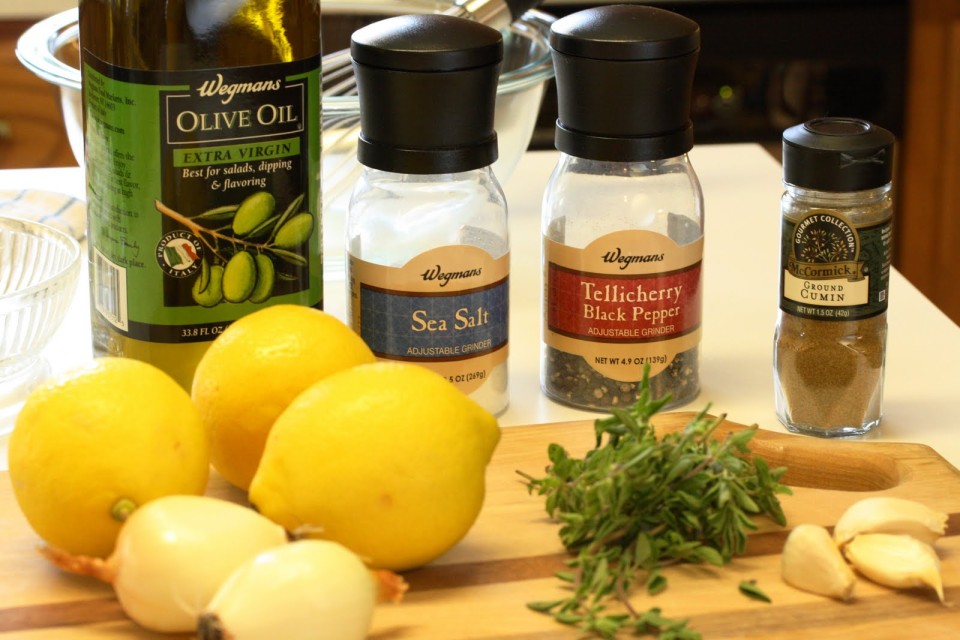 First I mixed a marinade of oil, lots of lemon juice, dried oregano, minced garlic, salt, and pepper. I cut skinless, boneless chicken breasts into 1.5-inch cubes, tossed them in the marinade and put them in the fridge for about five hours. When I was ready to cook, I cut chunky slices of onion and did the same with red bell peppers. Then I heated the skillet until it was hot and threw the onions, and grape tomatoes, then covered the skillet with the griddle. I opened the skillet just once to give the veg a stir, and made some quick tzatziki while the onions finished charring.

After I pulled out the vegetables, I used the same method on the drained chunks of chicken. Again, I only took the griddle lid off to turn the chicken pieces, then slammed it on again. Creating this sealed heat chamber and keeping it closed as much as possible was the secret of getting a charred taste with no smoke.

When everything was done, I wrapped the chicken and vegetables in a homemade flour tortilla and ladled on a bit of tzatziki. The result was delicious, satisfying, and definitely worth repeating.