Video: How to Make Chimichurri Sauce with 212 Steakhouse

You are here: Food 101 » Video: How to Make Chimichurri Sauce with 212 Steakhouse

There’s a scene in The Devil Wears Prada where a perfectly delicious-looking steak from Smith & Wollensky, carefully garnished with green, is rejected by the virago empress of fashion played by Meryl Streep. At first I thought the green was chimichurri sauce, then realized it was only parsley, as Streep’s character would never indulge in anything so luxurious as chimichurri. The steak ended up in the sink, but I ended up going home and making the sauce. 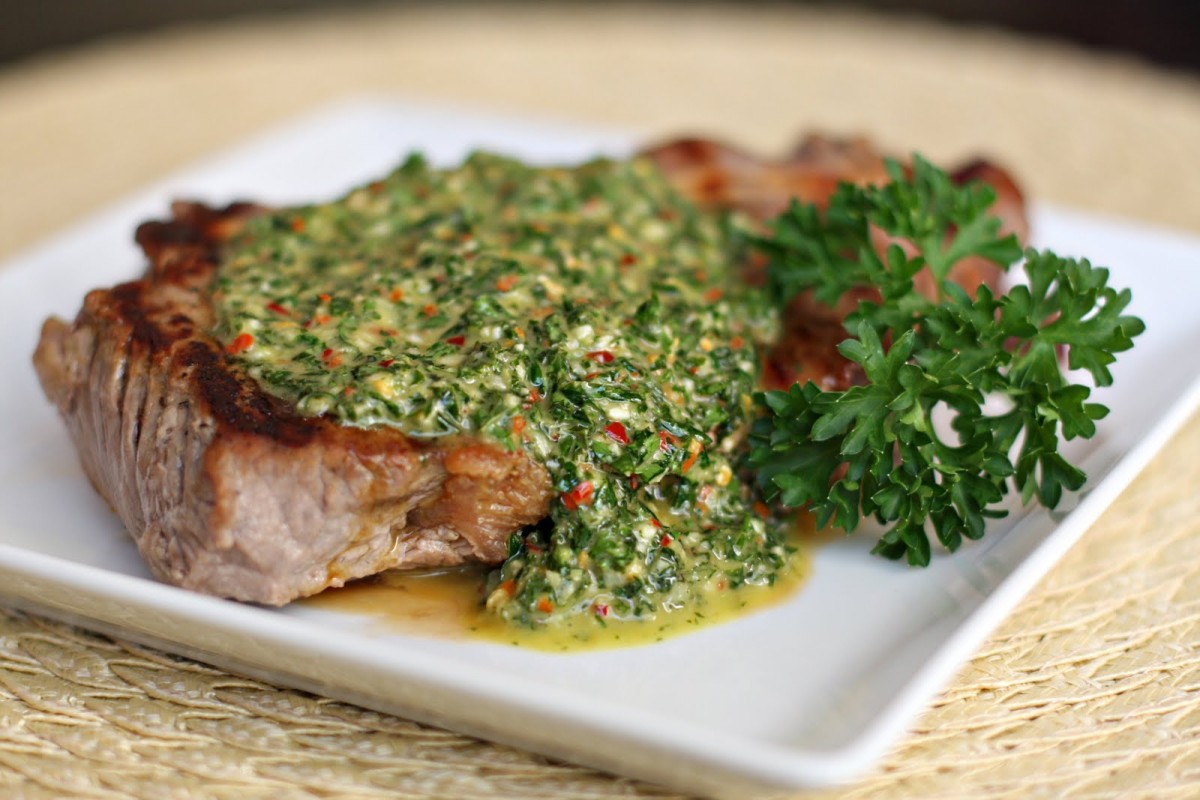 What is Chimichurri Sauce?

For far too long in my life, I didn’t know what chimichurri was. I’d been told it was “South American steak sauce,” so pictured something spicy and red, which isn’t usually my choice for meat. Then I learned – chimichurri isn’t red at all. It’s an intensely green, intensely garlicky, herbed vinaigrette. Minced parsley and lots of garlic are its hallmarks, and oregano is the principle herb. Though chimichurri is used primarily on grilled beef, it’s actually good on just about everything, including pork, lamb, sausages, poultry, fish, as a marinade and even as a dressing for salads and vegetables.

There’s general agreement that chimichurri is a specialty of Argentina and Uruguay – but did it begin here? And what does chimichurri mean, anyway?

There are several answers to both of these questions. There’s actually no such word as chimichurri, which has led to all sorts of speculation. Although Miguel Brascó, a noted Argentinian journalists and gourmet, claimed it was a word of mixed English, Spanish, and native South American origins that came about in the early 19th century when captured British invaders asked for food, the theory is neither proven nor convincing. Another theory also implicates the British, saying the word as a riff on the name of a local meat vendor, Jimmy Curry. Unless more evidence comes to light, I don’t believe that one either. 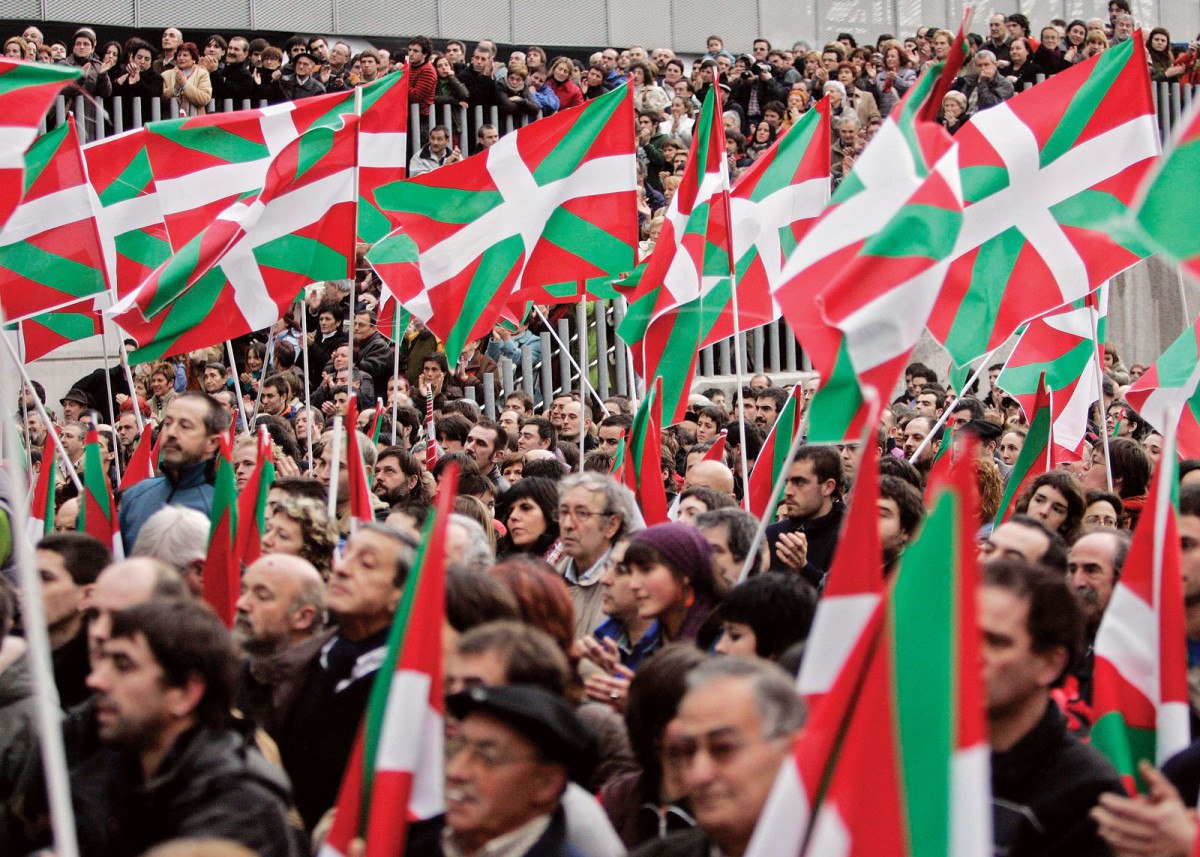 The story I find the most convincing is that the name and the sauce arrived with the Basques who immigrated to Argentina in the 19th century. The original Basque word, tximitxurri, means “a mixture of things in no particular order.”

Chimichurri was virtually unknown in America until the late 20th century, when the grilling craze demanded recipes for both marinades and sauces. A recipe for chimichurri appears in the Time-Life Foods of the World series volume on Latin American cuisine. Published in 1971, the book came at a time when Americans were still heavily into barbecue sauce, and brushing a little Italian dressing on chicken was considered wildly international. It took another generation for chimichurri to catch on.

How to Make Chimichurri

On our recent foray to 212 Steakhouse to explore their offerings, Chef Alejandro demonstrated the impossible – namely, that even top-of-the-line meat like Kobe beef can be nudged into the Nirvana zone with a judicious application of chimichurri. There’s something deliciously ironic in discovering that the finishing note for meat raised so painstakingly needs only a few minutes to prepare. Let Chef Alejandro show you how, then whisk up a batch of your own.

1. Finely chop the parsley leaves and some of the stems and place in mixing bowl.
2. Peel the cloves of garlic, finely mince, and add to bowl.
3. Add remaining ingredients and whisk to combine. 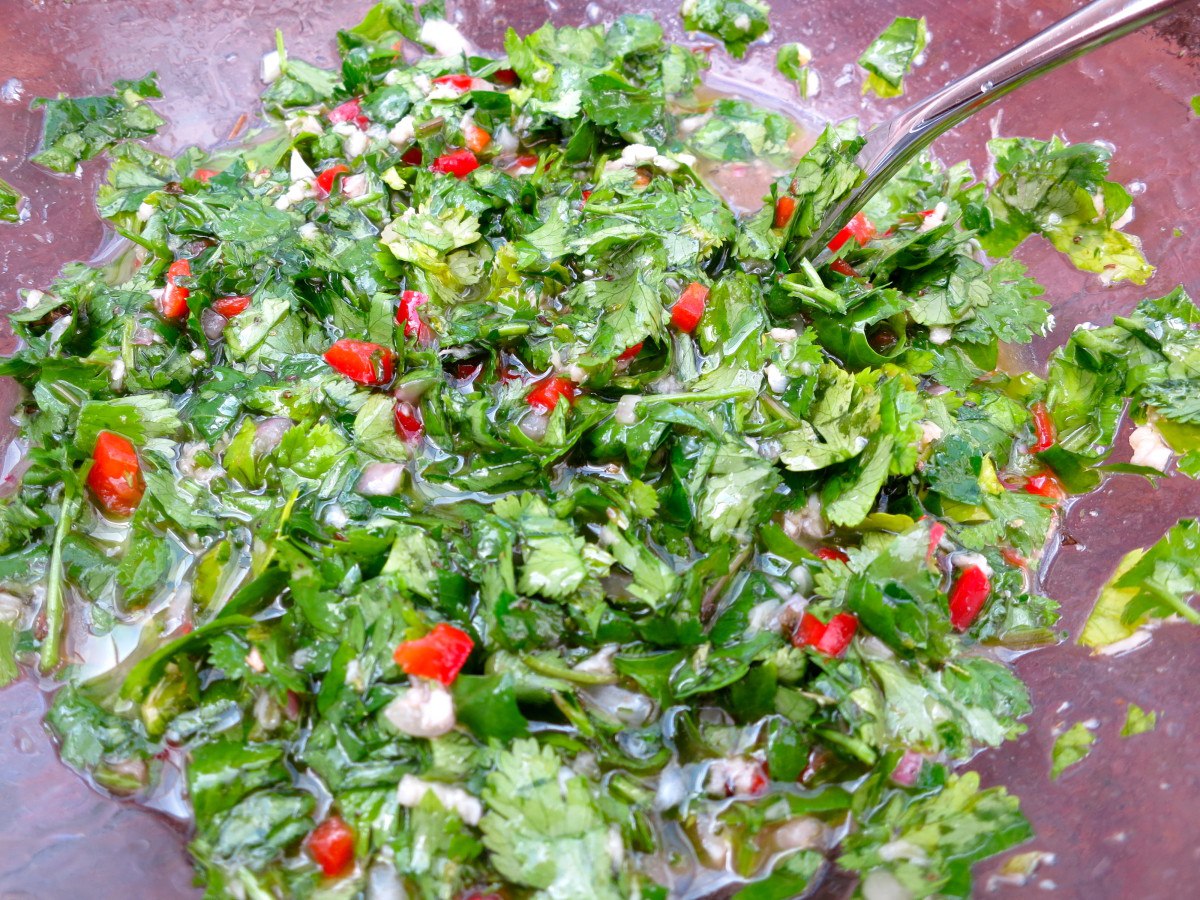 Of course, people vary the recipe to suit their tastes and to bring out the best of the meat or vegetables the sauce will go on. Common add-ins include red pepper flakes, cilantro, bay leaf, tarragon, thyme, rosemary, tomato, and red bell pepper.

Be adventurous when it comes to trying it on different foods, too. My three favorite ways to enjoy chimichurri are on shrimp tacos, on pan roasted artichokes, and on a bagel. Yes, you read that right. A bagel. I add the cream cheese as usual, spoon on a little chimichurri, spread it evenly over the cream cheese, and enjoy. There’s something about the cool creaminess of the cheese, the deeply green taste of parsley, and wake-up-call bite of fresh garlic that I find hard to resist.