You are here: News » This Seaweed Tastes Like Bacon?

Researchers at the Oregon State University have discovered and patented a type of seaweed that tastes like bacon… Say what!?

Dulse is a highly nutritious seaweed strain that grows along the Pacific and Atlantic coastlines. In fact, it’s a super-food with 16 percent protein and twice the nutritional value of kale. According to researcher Chris Langdon, it’s an excellent source of vitamins, minerals, and antioxidants, too. Oh, and it happens to taste like smoky, salty, savory bacon. 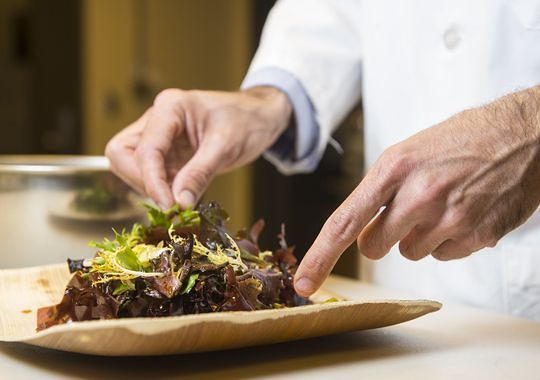 Dulse, which appears as a translucent red lettuce, will taste like bacon after it’s been smoked, just as you would a slab of bacon. Some Portland-area chefs are starting to experiment with the product now. But, Portland-based Iron Chef Vitaly Paley is already serving dulse at his restaurants. He says,

“My job is to make customers understand that it’s not just good for them, but that it’s something they really want to eat. So, at first, they didn’t know they needed it, but now they can’t live without it. It’s my job to get them to that place.”

Everything is better with bacon, and if this food also fits within my clean eating diet, it’s the best of both world’s.

[Tweet “”My job is to make customers understand that it’s not just good for them, but that it’s something they really want to eat””]