The owner of L’Aberto Dei Gelati, Monia and her husband Alessandro, explaining their philosophies on their new Gelato store in Park Slope.

Blue cheese flavored gelato? Bell pepper flavored gelato? Not your typical gelato flavors, I know, but trust me, they are fantastic. The creators of these delectable concoctions would tell you that this is due to their use of only “raw and natural ingredients”. While that may be true, this Italian couple’s sheer creativity and passion behind their new gelato store deserves a lot of the credit as well.

With their strong emphasis on using only ingredients found in nature in the best forms, one can understand why this Italian couple named their new gelato store “the tree of life” in Italian. Now, you may be thinking that this is just another ice cream/froyo place to pop up in NYC and the concept of using fresh ingredients isn’t exactly the most creative way of separating this one from the plethora of others out there. If that was the case, you’d be right, but there’s something else that differentiates this place; the flavors.

The flavors at this place change with the seasons. At this gelato place, that doesn’t just mean that the strawberry variety is available during strawberry season, but that the bell pepper gelato and even the fish (yes, fish) gelato are available during those peak seasons as well. As scary as fish flavored gelato sounds to most people, after trying a few of their other flavors (like the blue cheese flavor pictured below), I’d jump on the opportunity to try it. Not only do they make these unique flavors, but they don’t just make weird flavors for the sake of making weird flavors.

For example, the blue cheese flavored gelato was well paired with a little bit of honey and a piece of bread to balance out the flavors in the gelato itself. The bell pepper gelato had a small block of cheddar to perform a similar balancing act. And the raspberry gelato was determined to not need any extra accoutrements and so was served simply on it’s own. Hopefully, this illustrates what I mean when I say that these creations aren’t simply different for difference sake. What’s that? You can’t picture what these flavors might look like? No problem. 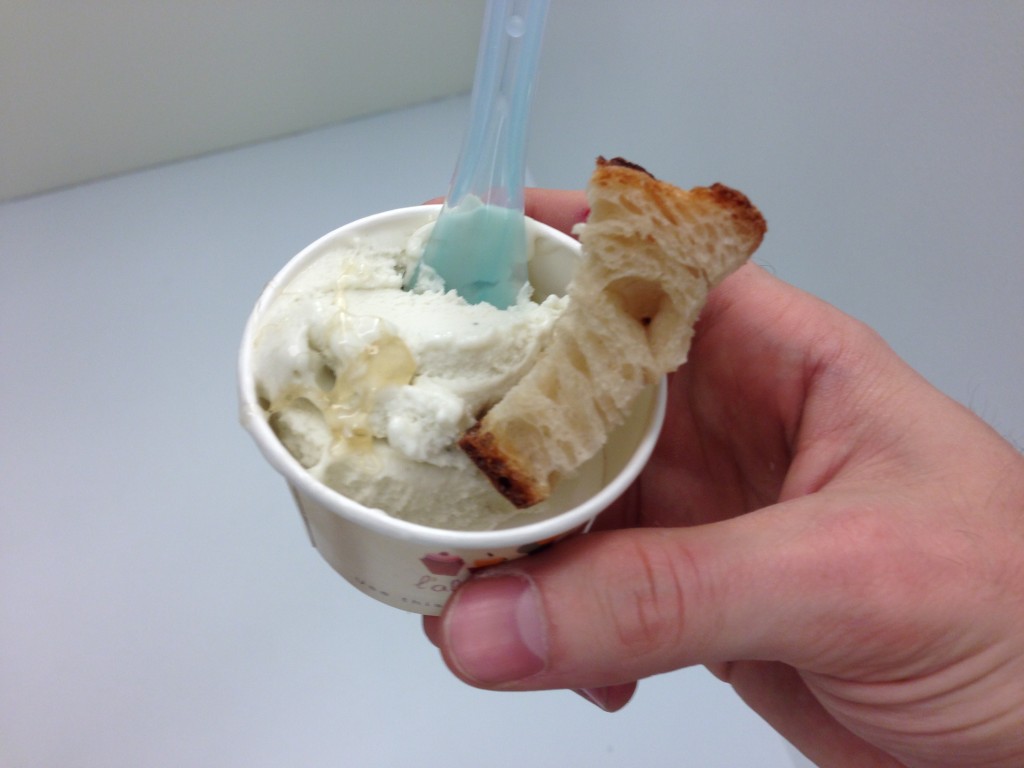 Besides their creative gelato, they have baked goods, espresso, panini and wine! I can’t speak on anything besides the gelato honestly, but that in itself is worth the trip to Park Slope.

Check out their site for how to get your hands on some yourself! Let us know in the comments or on Facebook, Twitter, or Google+ what you think and which you’ve tried!