As summer nears, you’re likely to take to the wilderness — or at least a campground away from home. What should you pack in the cooler, though? Which are the best foods for camping? There are some choices to make, but maybe not as many concessions as you’d think.

We take a look at some of the best camping foods, bringing you suggestions on what to bring with you as you venture out into the wild. Some you may have earmarked to pack in the cooler already, but others may have you re-thinking how you’re going to eat while camping.

You want pizza all the time, and there’s no reason you shouldn’t have it. It can go with you, too — if you plan it right. Sauce and cheese travel light, and you can take a sparing amount of toppings with you.

To make it even easier, we suggest using yogurt dough. Take one cup of greek yogurt, and mix with 1-1.5 cups of self-rising flour. Roll it out, and bake it without anything on it. When you get to the campsite, toss on the sauce, cheese and toppings of your choice and finish on the grill over medium heat. 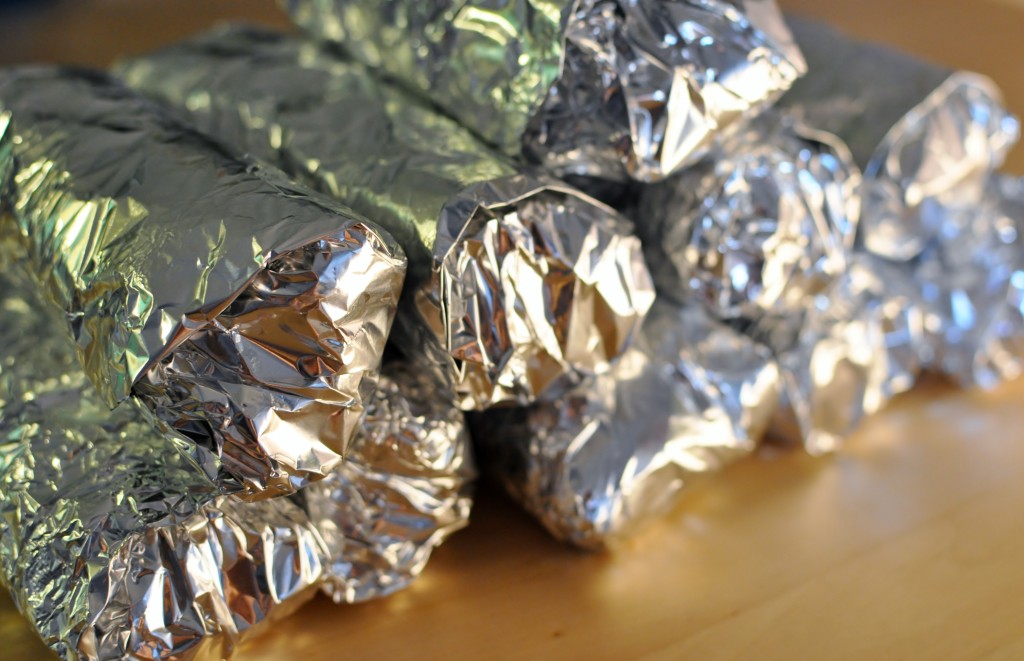 Who wants to go without a burrito, like, ever? You don’t have to, even when you’re miles from civilization. Cook your ingredients separately ahead of time, and cool. Once your burrito guts are chilled, assemble and wrap in foil. When you’re ready to eat, slap those bad boys on the grill and wait a few minutes, rotating occasionally. This recipe will get you going, but remember — it’s a burrito, it can be anything you want! 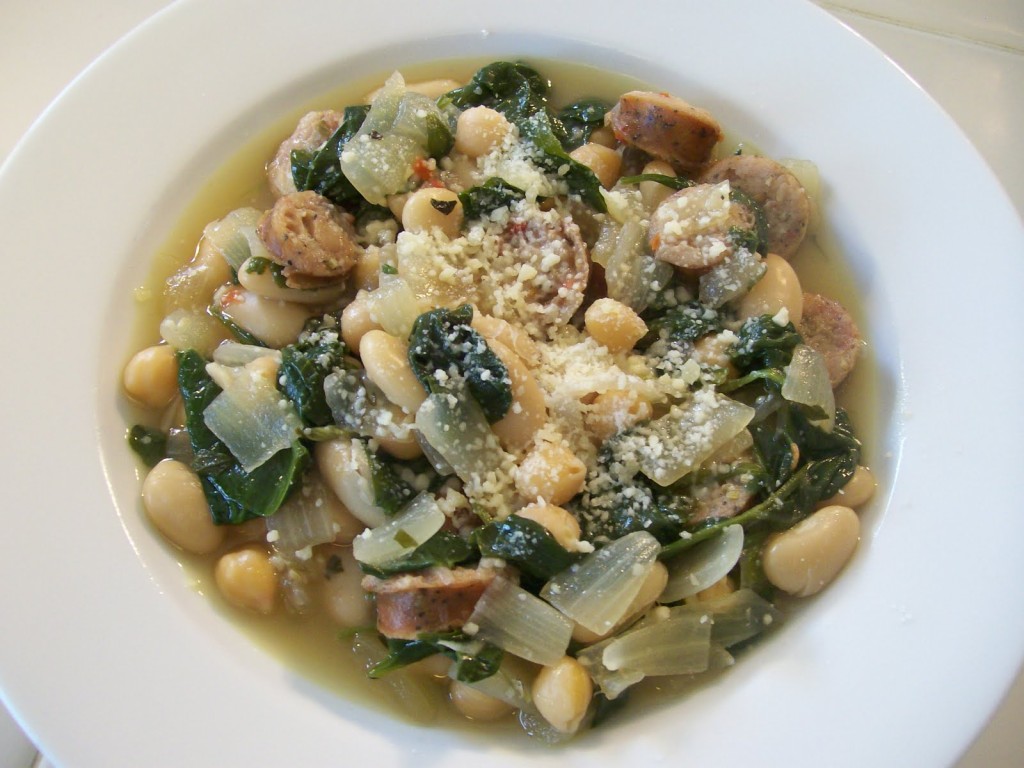 If you’ve got a dutch oven and a little fire, you can create an easy stew that will leave you with time to enjoy nature. All you need is some white beans (cannellinis are good, here), good sausage, and a few bell peppers to get running. Toss in some garlic cloves, rosemary, any other spices you might like with a little water. Keep an eye on it to make sure it doesn’t dry out, and you’ll have a great stew you can hold over for tomorrow if you like! A great recipe from Giada De Laurentis gives you a solid foundation, but don’t be afraid to get creative with it. 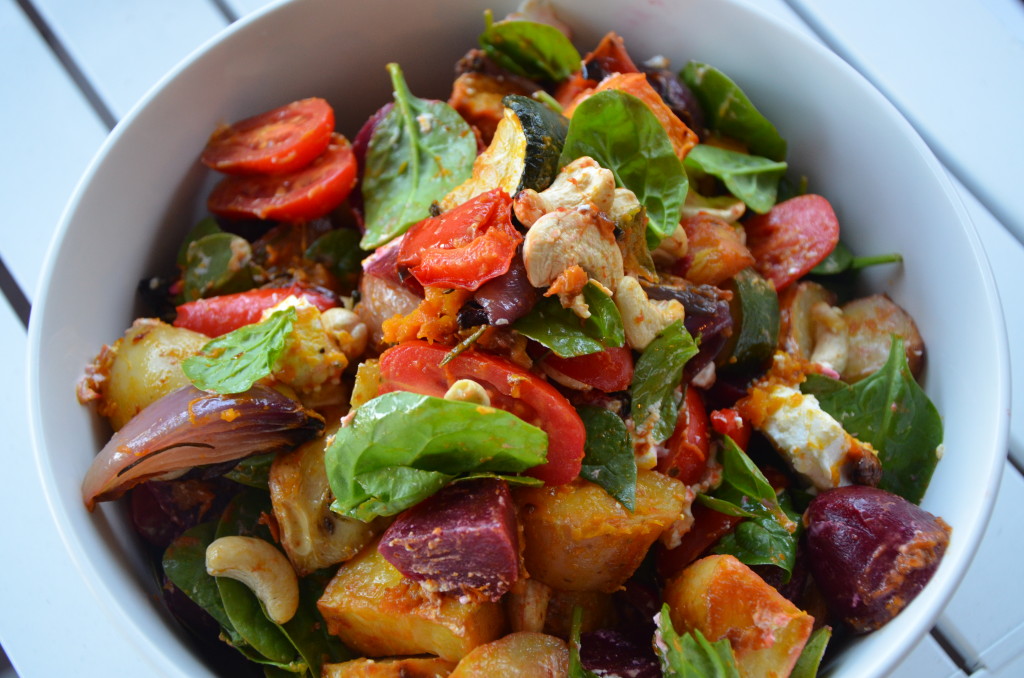 There’s no reason you have to eat heavy when camping, but there’s also no reason you need to feel like a rabbit, either. Take some favorite veggies with you, and make a grilled veggie salad!

Slice a few zucchini lengthwise (thinly), and quarter a few red onions. Take the broad side of a few red bell peppers, and toss in some yellow if you can as well. Take a few portobello mushrooms and slice those just a touch thicker than the zucchini, lightly drizzle with some oil, and onto the grill they go! Season with salt and pepper to taste, and feel free to sprinkle some fresh or dried oregano and rosemary for an earthier flavor. If you’re curious which veggies to bring with you, check out this recipe from Food Network. 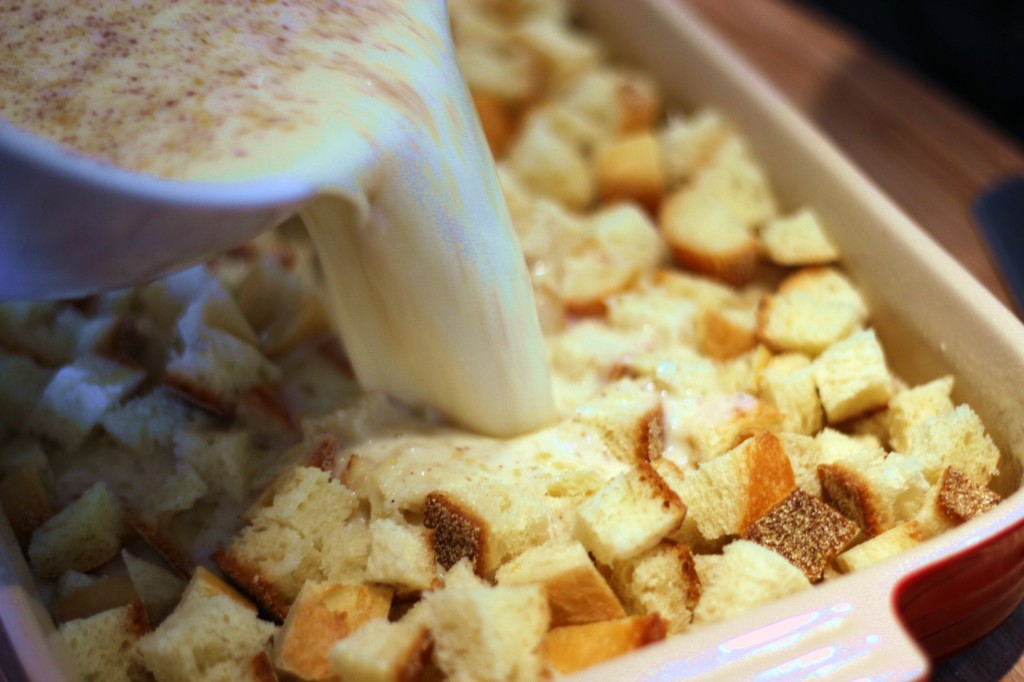 That sweet tooth can strike anywhere, any time. Bread pudding is a versatile food that can be eaten at any time of day and not be out of place. Use it to carb load in the morning, or satisfy your late night sweet tooth. You can make it in a bread pan and take slices if you like, too! A Betty Crocker recipe gives you the solid foundation for bread pudding, but feel free to add raisins or something similar to liven it up. 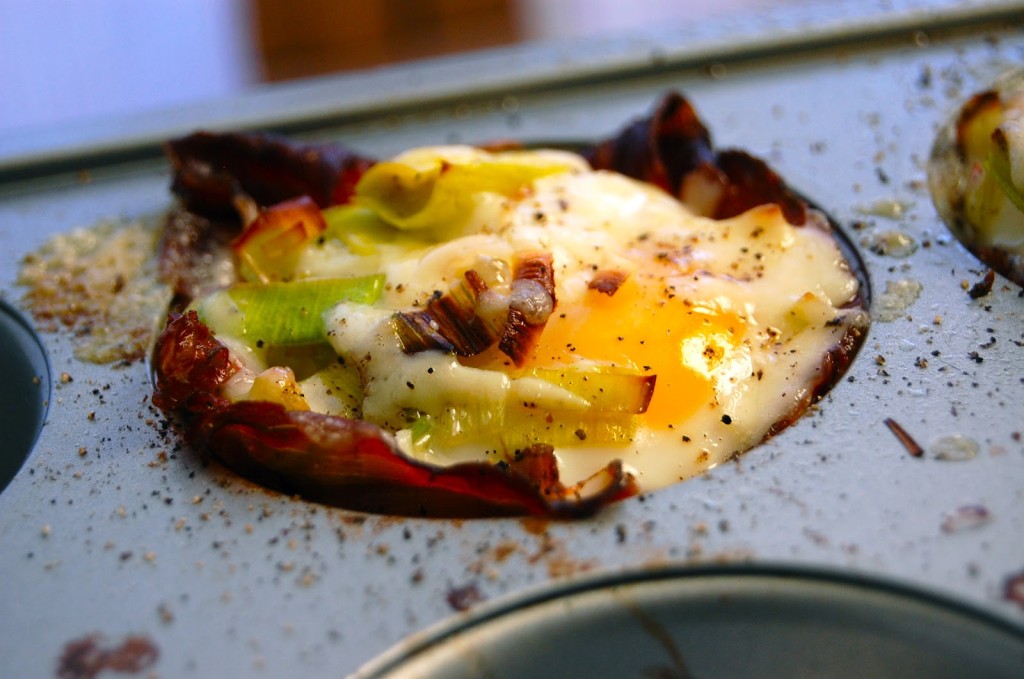 You’re not going to want to leave your favorites at home, so why even try? Take some thinly sliced pieces of ham and a muffin tin along with some eggs for an easy breakfast.

All you need to do is place the ham in the muffin tins, then crack an egg inside. Set over a medium-low heat on the grill or campfire. The ham imparts a wonderful flavor on the eggs, and it all comes out of the pan easily. If you’re really going for the “roughing it” lifestyle, this one is paleo approved. If it sounds too complicated, check out this recipe to see just how easy it really is. 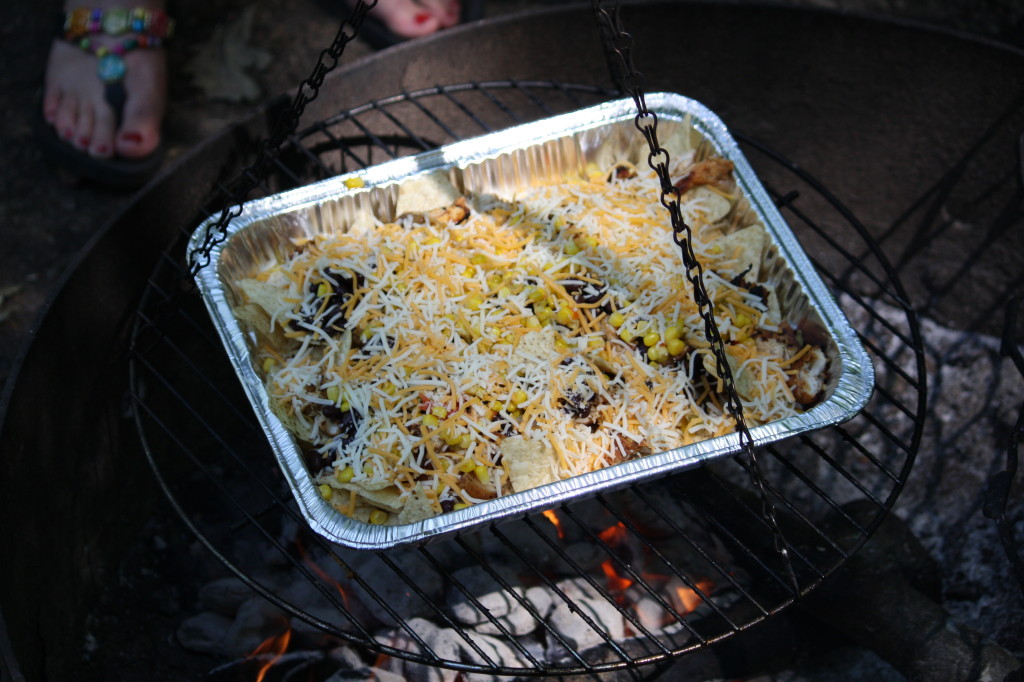 Everyone loves nachos, and making them while camping is a lot of fun. Bringing all the normal nacho stuff with you is pretty easy, and tossing them together is a quick and easy fix when you’re starving. All you really need to do is put some chips, beans, and cheese on a foil sheet, and tuck it near a grill or campfire to warm up. Bonus for nachos: corn chips can be used for kindling. Kind of gross, but it’s a fact! If you need a checklist of what to bring, this recipe will get you started. 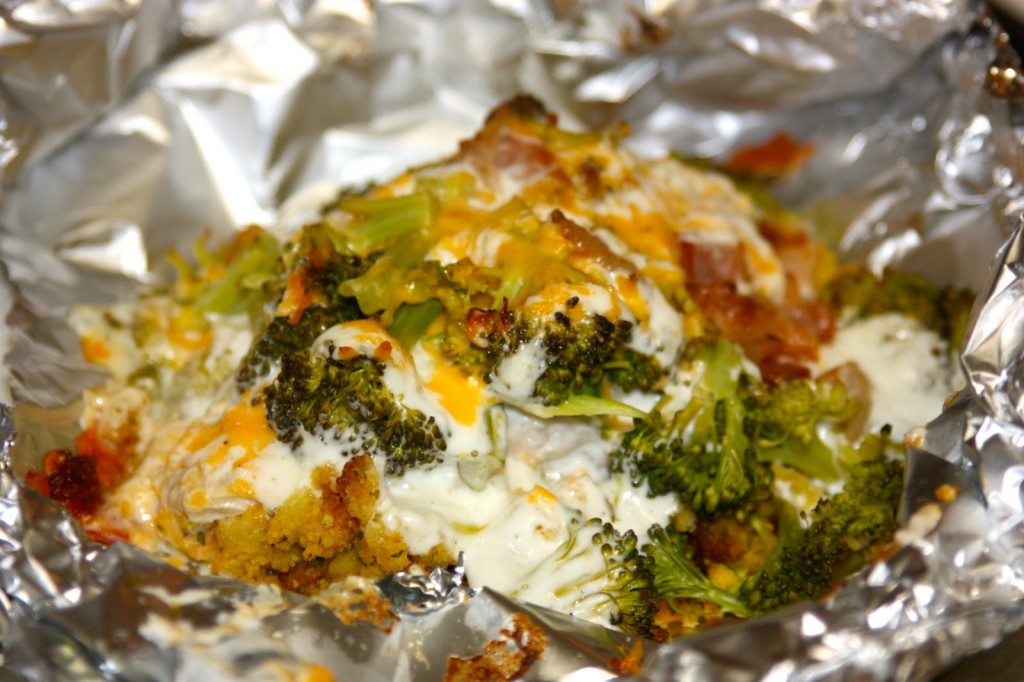 This one may not be in your wheelhouse, but it should be! Hobo Wraps are easy to make ahead of time, and can be anything you like;  a quick and easy fix that is a lot like the burrito idea we told you about earlier. Take some cooked, sliced chicken breast along with some veggies like peppers and mushrooms and some oil and seasoning of your choice. Slide them into a foil packet, and toss on the grill when you’re ready to eat. If you need a bit more help, check out this recipe we really like! 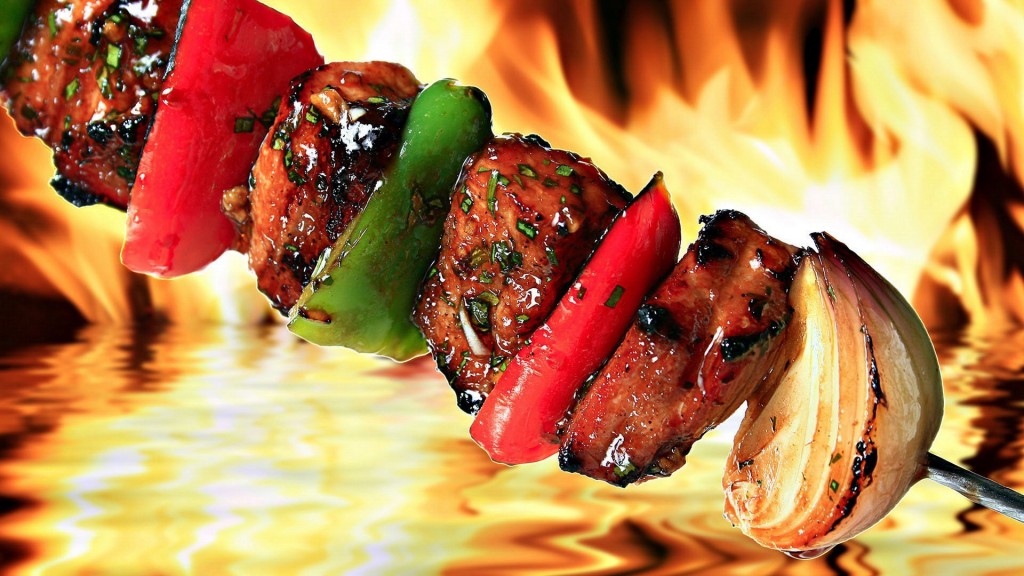 Kebabs are another fun way to add a different flair to your camping trip. They can be made ahead of time, and tossed on the grill just ahead of dinner time. Be sure to keep these properly refrigerated if you include meat, though.

Whatever kind of kebab you choose to bring, a simple sauce of finely chopped mint and vegetable oil is both a dipping sauce and baste while grilling. We suggest keeping it simple with veggies like mushrooms, onions, and grape tomatoes — but feel free to toss some cubed chuck roast on there if you like. If you want the protein without the refrigeration concern, try a tofu product like brick tofu. Here’s a recipe to get you on the right track. 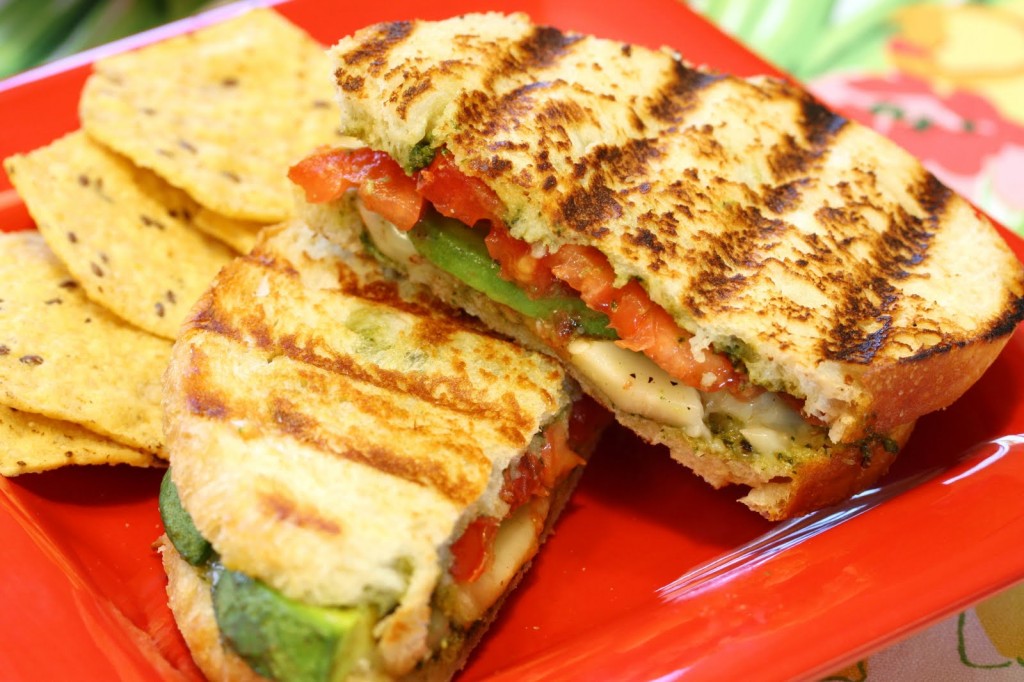 You’re in nature; there’s a grill. Nature has rocks, grills have fire. So long as you bring some stuff to make sandwiches, you’re in business.

Make a sandwich as you normally would (we suggest a nice mozzarella, tomato, and basil for this one), and then find a rock. Not one big enough to crush your sandwich, but big enough to weight it down. Wrap that rock in some foil (after you wash it!), and you’ve got yourself a panini press. If you don’t have a grill, the same can be accomplished in a dutch over or cast iron skillet over the fire. 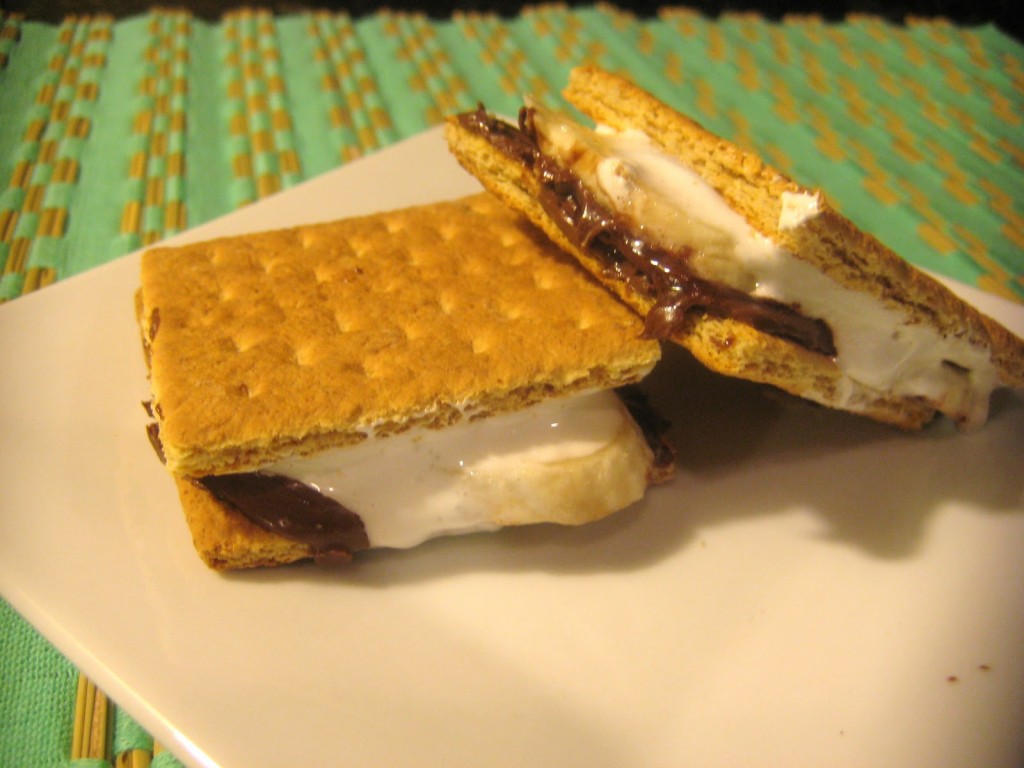 Some things just aren’t things without other… things. Camping isn’t camping without s’mores, so you gotta take stuff for s’mores. If you don’t want to go the traditional route, use nutella and banana along with marshmallows! Here’s a recipe we found sans banana, but you can add them if you like.

Could you take hot dogs and condiments? Sure you could, but that’s not much fun. When looking at foods for camping, we suggest thinking outside the box a touch as we’ve done here. While some of these may take up more room than you bargained for, the ability to eat similarly to how you would at home rather than hunting and gathering makes for a comfortable camping trip.