What You Should Know About Water Kefir

You are here: Food 101 » What You Should Know About Water Kefir

Look out kombucha, “water kefir,” is here. And, it’s a newer, sexier, less sludgier way to give your intestines the digestive lovin’ that they so crave.

While most of us know “kefir,” as the tangy yogurt drink that presents a challenge to all but the Eastern European palate, it turns out there’s a new strain of symbiotic microbes on the market.

Tibicos, sold as water kefir grains, is the specific, co-dependent combination of bacteria and yeast used to brew the fizzy water. The bacteria and yeast are held together in granules by their mutual attraction, which allows the grains to hold their shape in and out of the water.

Think of the two as the “Jack and Rose” of the microbial world—but with a more lasting future.

While milk kefir depends on lactose for its fermentation, water kefir feeds on sugar. But, unlike those of us unlucky enough to belong to the animal kingdom, the microbes that make up water kefir feed on limitless sugar with some pretty positive effects. And, when brewed and consumed, they pass on the benefits of this sugar shape-shifting superpower.

The reactionary process that occurs when making water kefir is similar to what happens when brewing kombucha. The grains consume and convert the sugar, releasing lactic acid, alcohol, and the characteristic, bubbly carbon dioxide into the water. As an added benefit, the culture creates an environment for good bacteria to grow—hence, the drink’s probiotic benefits.

But, unlike kombucha, you won’t see pre-brewed water kefir at your local grocery store. So, roll up your sleeves, and get ready to get your hands dirty. It is bacteria, after all. 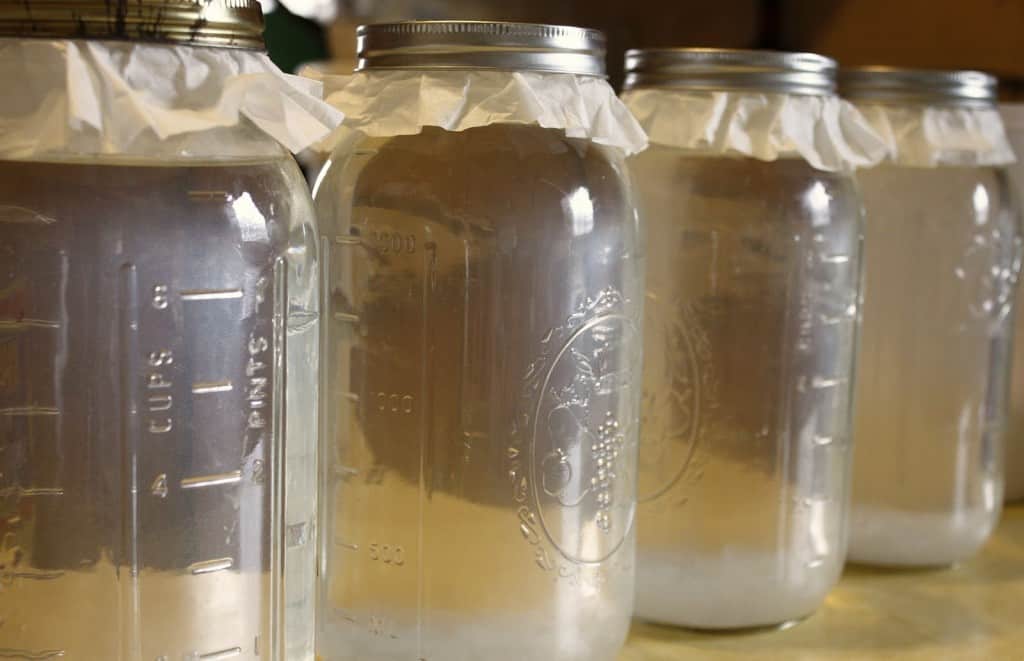 For a taste of the probiotic treat, the first thing you’ll need is to find the kefir grains. They are sold online by a variety of health food and wholesale vendors, so this won’t take much digging.

You’ll also need a canning jar, a pop-top bottle, a little cheesecloth, and a sugar of your choice. If you’re feeling confident about your home brewing abilities, you can also amp up your water with a variety of dried fruits and extracts. For some in-depth guidance on the flavoring process and possibilities, there are entire blogs dedicated to brewing, flavoring and concocting kefir sodas.

But, we’ll start with the basics.

Most recipes recommend using an organic, mineral-rich cane sugar or the unrefined cane sugar jaggery–to promote the tibicos’ growth. Though it is possible to use honey in the fermenting process, over time the anti-microbial properties of the honey will weaken the tibicos and make it more difficult to keep alive. So, it’s best to just stick to sugar.

Melt the sugar by stirring it into hot water (1/4 c. sugar to about 6 c. water). Then, let the mixture cool until it returns to room temperature.

Place the water kefir grains (1/4 c. or equal parts to the sugar) inside the canning jar and add the sugar water. Some brewers like to also flavor the water during the initial fermentation, but it’s not a necessity.

Partially seal the canning jar by placing a layer of cheesecloth between the rim of the jar and the disc-shapped lid. Tighten the band of the lid so that the cheesecloth is loosely secured, leaving enough room for the water to breathe. The cheesecloth filters the air coming in, keeping out debris but letting bacteria rich oxygen in.

Leave the jar out at room temperature for 2-3 days, taste testing along the way. When fermented, the water will have a sour flavor similar to a fizzy lemonade. Depending on how tart you want it, the fermentation time can vary, so feel free to experiment.

The water is now ready to be strained and enjoyed. It’s jam packed with a high microbial count and just begging to help you digest that late night pizza. But, if you’re a fan of delayed gratification, we recommend taking it a few steps further.

This is where the flavoring comes in.

Strain the first mixture, removing any initial flavoring elements and the kefir grains for later use. In the pop-top bottle, add the strained mixture to your flavoring elements of choice. You can use any number of combinations involving extracts, fresh fruit, fruit juice, and dried fruit. Did we mention fruit?

V. Spoiled, part two—will this get me drunk?

Tightly seal the top and allow the mixture to ferment at room temperature for another 18-24 hours. Then, place the bottle in the fridge to halt fermentation and allow the carbonation to develop.

Unless you want to reenact that time you made a fool of yourself in da’ club, proceed with caution. After a few days, the carbonation packs a punch and more than a few unaware amateur brewers have been covered in a release of kefir fizz.

Once the soda has had a few days to carbonate, you’re ready to pop the top and enjoy. Please, drink responsibly.