How To Bake Bacon

Bacon is delicious in any form it comes in: wrapped around chicken, with eggs and hash, in sandwiches, and even as ice cream (yes, that exists). But, maybe you’re reluctant to make bacon at home because of the greasy, awful mess it can leave in your kitchen. If you want to avoid oil splatters on your stovetop, try baking bacon in the oven instead – it’s simple, tidy, and highly delicious. Plus, it’s the perfect way to cook bacon in bulk for a brunch party or, well, if you just want a lot of bacon (we won’t judge).

But before we get to learning how to bake bacon, let’s review some bacon fun facts any pork-o-holic should know. Bacon is actually cured, smoked pork, but in various regions of the world it comes from different parts of the pig. In the USA, we cure our bacon from the pig’s belly; in Canada, bacon comes from the loin and in Great Britain it’s made from the shoulder. The preservation of bacon initially started in China in 1500 BC, and was adopted by the Greeks and Romans – many, many moons later Oscar Meyer would patent the first slice of bacon in 1924. The average American consumes about 18 lbs of bacon a year (guess that makes us above average Americans?), and about 11% of a pig’s weight is in bacon, so if our math is correct, the average American consumes all the bacon off a 163 lb pig. Now there’s some food for thought.

If you’re as excited about bacon as we are, read below for our Baked Bacon recipe!

How To Bake Bacon 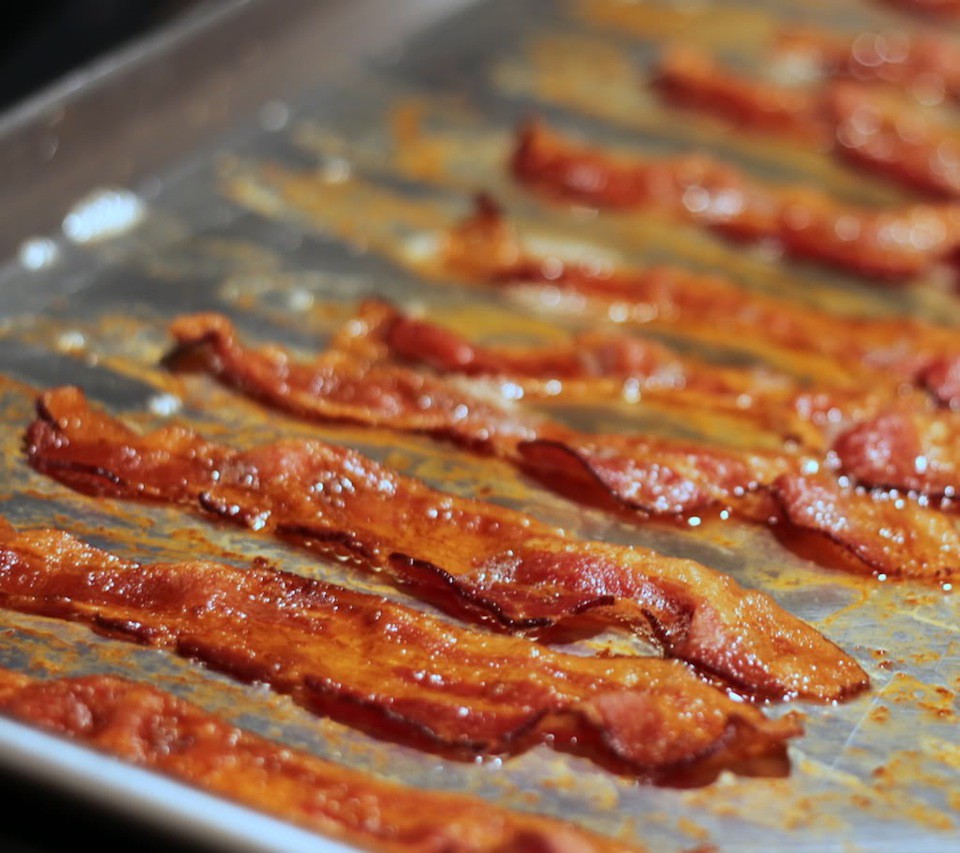 1. Preheat the oven to 400 degrees, and position your rack as low as it will go inside your oven.

2. Line a baking sheet with tin foil. (This will make clean up much easier later!) Place the bacon on the sheet but do not have them overlap. They can be close together, but if they touch, they will stick together.

3. Bake for 15-20 minutes, or until the bacon a deep golden-brown and appears crispy. The bacon will sputter as it does on a stovetop, but it shouldn’t be nearly as messy in the oven. When you remove the bacon, pour off the excess grease.

4. Remove the bacon from the sheet and allow it to cool on top of paper towels to drain the remaining grease. Serve immediately while hot, and enjoy! (You can also refrigerate for a week or freeze for up to 3 months!)

This recipe will leave your bacon crispy on the outside but chewier in the middle, so if you want more of a crisp, modify the thickness of your bacon, or try cooking it on top of a metal cookie sheet on top of the baking pan. Let us know how your oven baked bacon turns out, and or any other ways you love your bacon!