Goulash: A Fascinating Dish of Necessity

You are here: Food 101 » Goulash: A Fascinating Dish of Necessity

When I was very young, my mother sometimes presented us with a casserole dish called goulash, made of hamburger, spaghetti, something tomato-ish, and a can of alphabet vegetable soup. Even at that tender age, the redundancy of spaghetti and alphabet pasta struck me as just plain wrong. I was embarrassed because I knew that, whatever goulash was, this wasn’t it. I pictured other, more worldly families, eating the real thing and engaging in sophisticated customs like letting children drink wine with dinner.

My long-ago shame was re-awakened a few weeks ago when, looking for a goulash recipe, I came across picture after picture of a dish much like the one my mother had served, platefuls of hamburger, macaroni, and tomatoes, all billed as “American Goulash.” It was the beginning of a long and winding trail to discover the one true goulash. 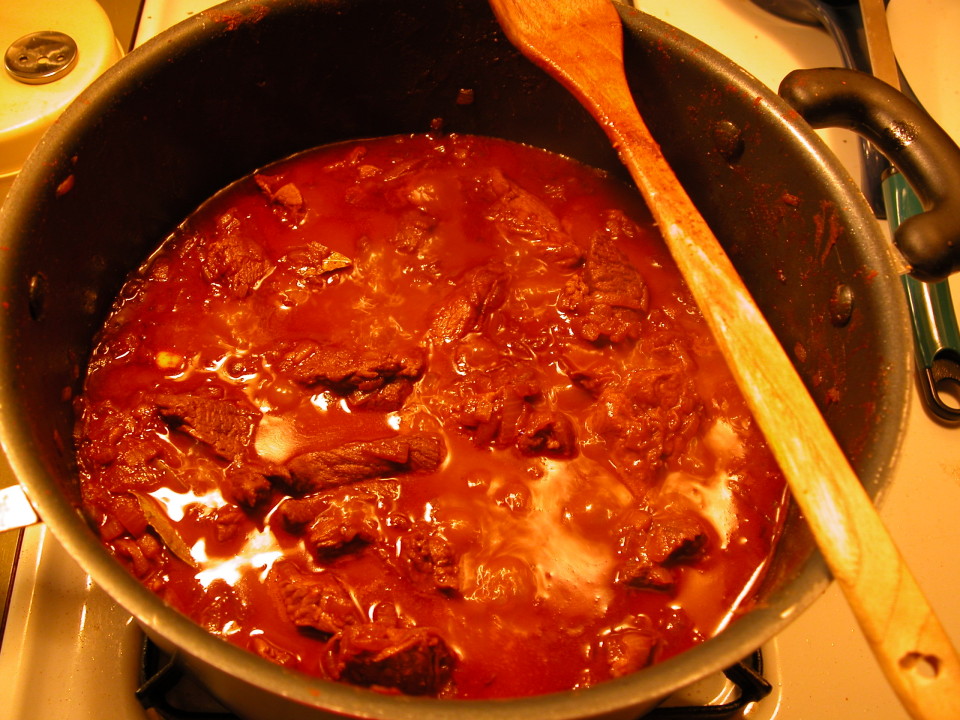 You know the phrase, life is what you make it? Well so, apparently, is goulash. Most dishes I research come with variations, but goulash blows past any definition of “variation” to something more akin to spontaneous re-generation across several continents. What’s known as American Goulash, the hamburger-macaroni-tomato casserole most of us have eaten, has almost nothing in common with various European versions.

Other vegetables that can be added include tomatoes, sweet peppers, carrots, potatoes, parsnips, beans, sauerkraut and mushrooms. The broth or gravy can be beefy, rich with wine and seasoned with vinegar, or intensely tomato-y. If sour cream is added, the dish is paprikás. The soup is served with rye bread for dunking, the stew is traditionally served over spaetzle, bow-tie pasta or wide noodles.

The only constant seems to be that the dish be heavily flavored with paprika, contain lots of onions, and be flavored with at least one tomato. This is, supposedly, the ancient and original standard – yet even this could not possibly have originated in Hungary as early as claimed, since both tomatoes and the peppers from which paprika is made come from the New World, and were unknown in Europe until the 1600s. 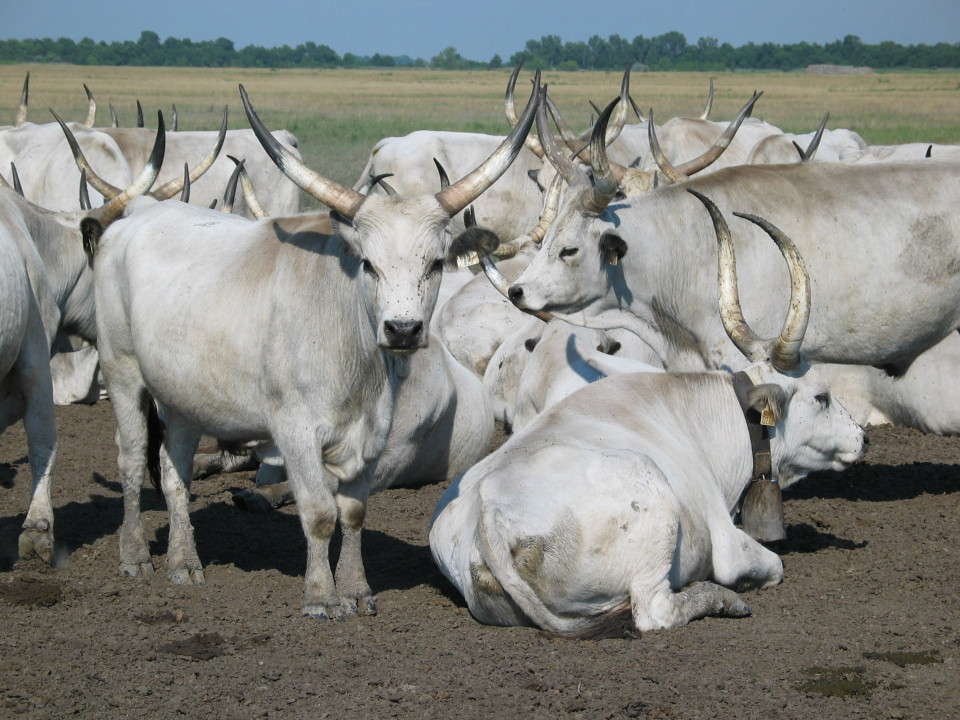 The origins of goulash reach back to 9th century Hungary, and was the invention of cow herders who drove their cattle from the country’s grassy plains to market centers. To sustain them along the way, the herders developed an ingenious way of transporting their food. They cut meat into cubes and stewed it with water cooked in an iron until all the liquid evaporates, then they dried it in the sun until it was dehydrated and light to carry. On the trail, they would pull out what they needed, add wild onions and caraway that grew along the way, pour in water, simmer until the meat was re-hydrated, and enjoy bowls of guylás leves, which translates to “cowherd soup” in Hungarian. 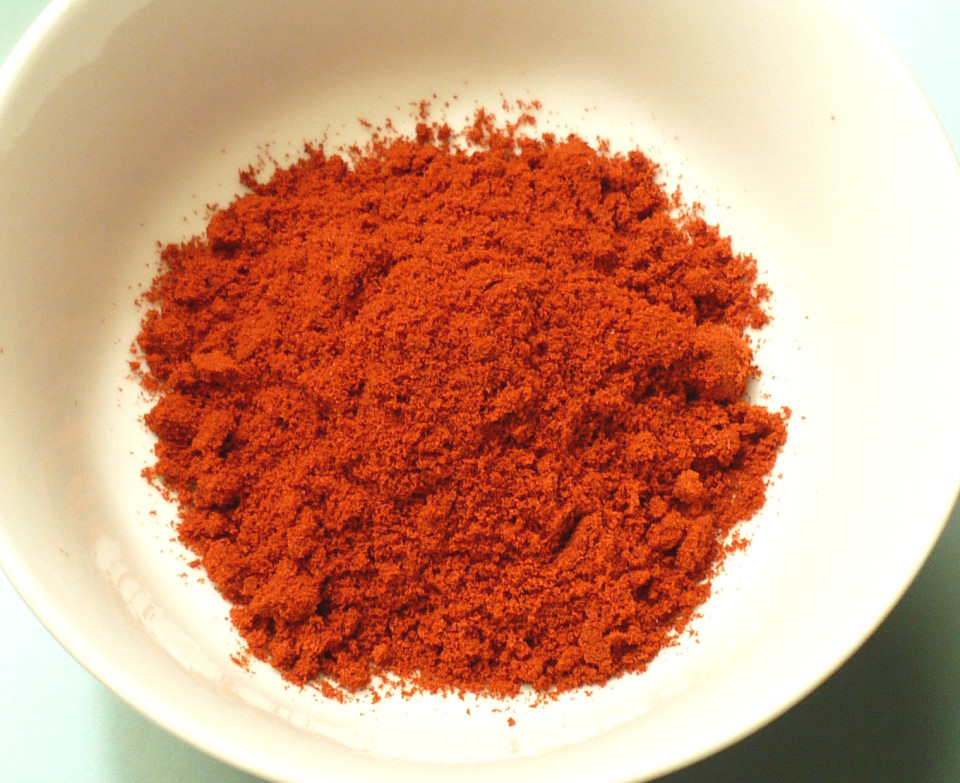 Throughout the Middle Ages, black pepper was Europe’s most popular spice. It was also wildly expensive, as were most spices imported from India and Southeast Asia. The vast majority of people ate a bland diet of boiled meats and grains. That changed in the 1600s, when New World foods were first cultivated in Europe. Tomatoes and peppers became especially popular, for their novelty as well as their intense flavors, which gave ordinary people an affordable way of adding new tastes to their diet.

It wasn’t long until people experimented with chili peppers, drying and grinding them to a powder. The powdered red pepper, with its heat and sharp bite, was reminiscent of black pepper. When the Napoleonic wars of the early 19th century cut off Europe’s supply of black pepper, red pepper became a substitute. Hungary especially excelled at producing a smoky, spicy powder – paprika – and incorporated it in many dishes, including goulash. By the time black pepper became plentiful and inexpensive, Hungarians had made paprika their national spice.

Like many dishes, Hungarian Goulash came to America with immigrants, who arrived in the late 19th century. An early recipe for “Gulash,” found in in The Settlement Cook Book 1903

, contains the essentials of the dish: beef, onions, paprika and tomatoes. During the great food awakening of the 1960s, when Americans became interested in the cuisines if their immigrant ancestors, Hungarian Goulash became wildly popular as a fancy hostess dish. In a 1969 Gallup poll, Americans named it as their fifth favorite food. 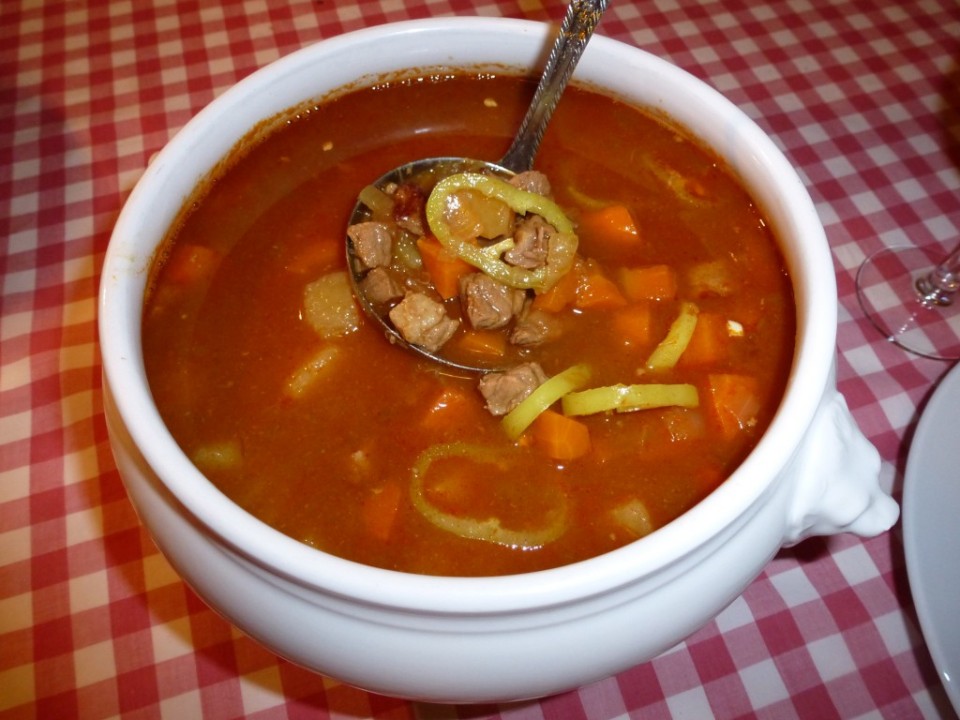 How to Make Goulash

Given the fact that there are several dishes known as goulash, it’s amazing that most of them follow the same rules.

First, an abundance of chopped onion is fried over moderate heat in fat, the onion is fried just until soft and golden, never charred or caramelized. The pan is then removed from the heat, liberally sprinkled with paprika (we’re talking in tablespoons, not teaspoons), and stirred into the onions. The point of removing the pan from the heat is to allow its flavor to be gently released by the warmth of the fat and onions, rather than risk scorching it over direct heat and ending up with a bitter tasting mess.

The pan is returned to the burner and cubes of meat are stirred into mixture until thoroughly coated. Unlike most stew recipes, flour is never used to coat the meat, only paprika. Beef stock or water is added and the dish is left to simmer for a while. Later, garlic, caraway seeds, tomatoes and other vegetables are added. Some recipes call for a final addition of a little red wine or vinegar.