Origin of the Manhattan Cocktail

You are here: Food 101 » Origin of the Manhattan Cocktail

The Manhattan is one of the most classic and continuously popular drinks ever created –and we’re not just biased because of its namesake. Ok, maybe we’re a little biased, but come on, what’s more classic than a Manhattan?

Well, turns out, though the name might be the same, the drink itself varies widely. Go into two bars and order a Manhattan at each and I guarantee you’ll get two quite different drinks.

Turns out, the Manhattan has been around for over a hundred years, with many different versions being passed down and put into print, so it’s nearly impossible to nail down the one true recipe to rule them all. Maybe that’s due to just how old the recipe is –there’s been plenty of time for it to morph –or maybe there never was a single version to begin with. But let’s delve a little bit into the history of the drink, so at least you’ll feel somewhat Manhattan-literate next time you go to order one.

What is a Manhattan? 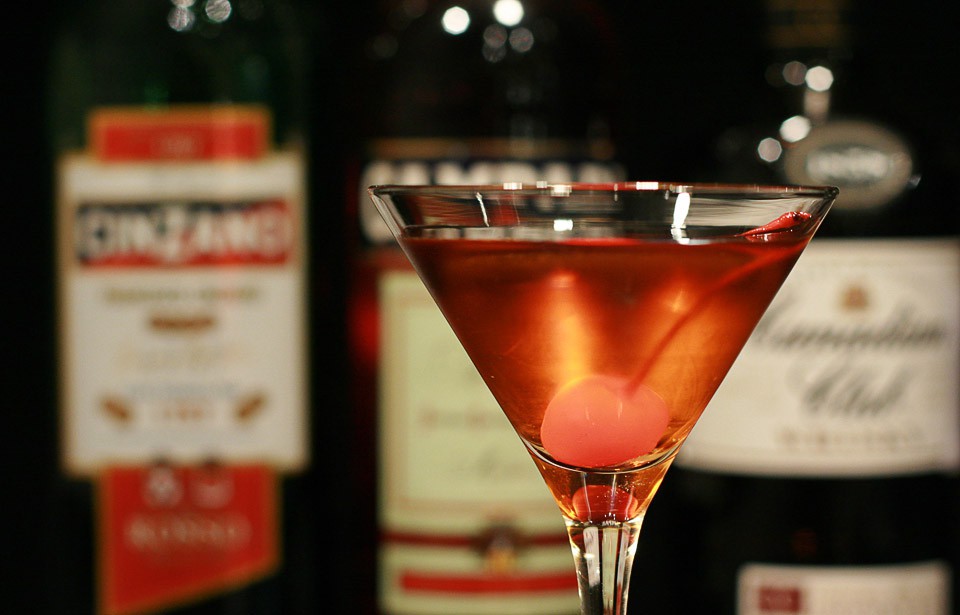 At its most basic level, a Manhattan is a cocktail made with whiskey, vermouth, and bitters. Rye whiskey is the most traditional choice, as that is what was first used, most likely because of the many distilleries in upstate New York. However, with the advent of Prohibition, Canadian whiskey became popular, simply because that’s all that was available. Since then the doors have remained wide open; any and all kinds of whiskey are used, along with bourbon, and even brandy.

Originally, the Manhattan was made with sweet vermouth and Angostura bitters. But dry vermouth and varying kinds of bitters are also sometimes used. Plus, once maraschino cherries hit the US market around 1900, those were often thrown into the drink for garnish. As far as serving goes, it’s common to see a Manhattan served in a martini glass, lowball, or even a coupe; both straight and on the rocks. Traditionally, and much to the chagrin of Mr. Bond, the drink if stirred, not shaken.

Over the years, even the name of the drink has varied. One of the earliest records of a Manhattan cocktail recipe comes from William Schmidt’s “The Flowing Bowl,” published in 1891. The recipe calls for 2 dashes of gum (gomme syrup), 2 dashes of bitters, 1 dash of absinthe, 2/3 portion of whiskey, and 1/3 portion of vermouth. Hmm, a bit different than the recipe we’re used to now. However, a 1908 recipe book entitled “Jack’s Manual” listed a recipe called the Brooklyn Cocktail:

Kind of sounds more like a Manhattan than that one with absinthe and gum syrup, right? And things only get more confusing from there. In 1930, the book Shake ‘Em Up! by V. Elliot and P. Strong contains a recipe for “Two parts of whiskey, one part of Italian Vermouth and a dash of bitters poured over ice and stirred vigorously” (p. 39) under the title “Tennessee Cocktail.” However, in 1948, David A. Embury’s book The Fine Art of Mixing Drinks was published to great acclaim, and solidified recipes for a number of classic cocktails; the Manhattan being one of them. The recipe is listed as 5 parts American whiskey, 1 part Italian vermouth, and a dash of Angostura bitters, stirred with ice, strained into a cocktail glass and garnished with a maraschino cherry. Classic. 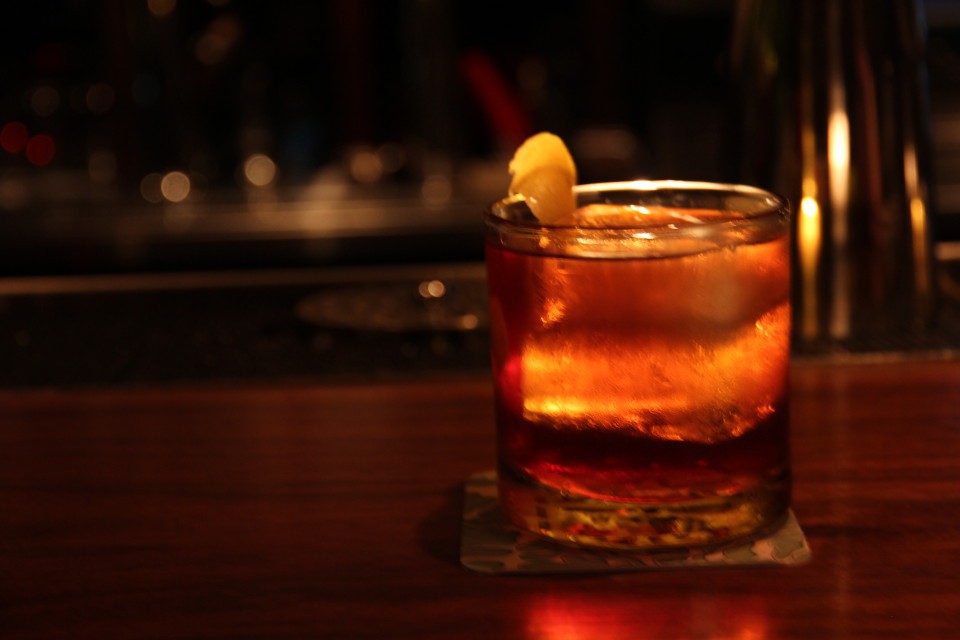 Short answer: no ones really knows.

Long answer: there are currently two main origin stories for the Manhattan. First is that it was invented at New York City’s Manhattan Club in the 1870’s. The story goes that Jennie Jerome, aka Lady Randolph Churchill, aka Mommie Dearest to good ol’ Winston, was hosting a party there in honor of Samuel J. Tilden, presidential candidate at the time.  Apparently a guest at the party, Dr. Iain Marshall, started whipping up drinks for the other guests at the party, and it was a hit. It was so popular that, even after the party, people began to request the drink, referring to it by the name of the club where it originated.

This story, while fun and satisfying, in that it’s easy to nail down a specific origin date, is likely false, as Lady Randolph was, by many accounts, in Europe and pregnant at the time the party was to have taken place.

The more likely to be true version of events comes from William F. Mulhall, a bartender who worked at the famed Hoffman House for over 30 years. In a story he wrote in the 1880s, he mentions, “The Manhattan cocktail was invented by a man named Black, who kept a place ten doors below Houston Street on Broadway in the 1860s.” He also claims that it was “probably the most famous drink in the world in its time.” This story, while more plausible than the first, is not without issues. Namely, if Mr. Black popularized the drink the world-over in the 1860s, it’s surprising we have no mention of it until the 1880s.

How to Make a Manhattan 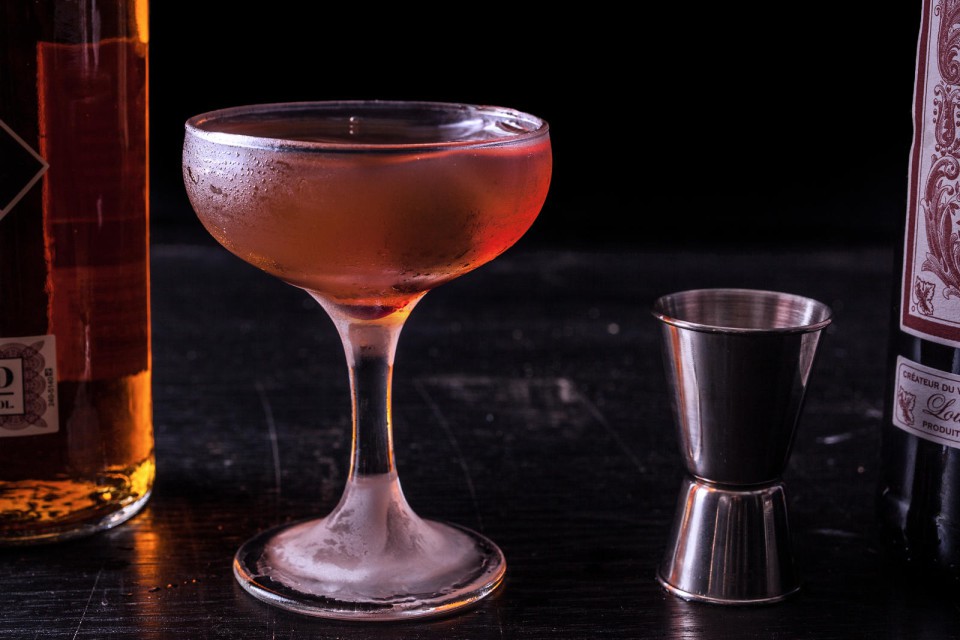 As you’ve hopefully gathered by now, there are many, many ways to make a Manhattan –from different ingredients to varying measurements. You really can’t nail down an end-all-be-all recipe. But, here’s a great, classic Manhattan recipe, along with a few popular ways to tweak it to fit your fancy. Enjoy!

Now you know all there is to know about Manhattans, why not congratulate yourself with a quick drink? Oh, and be sure to tell us about your favorite way to enjoy a Manhattan in the comments below.