Tom Yum Soup: The Heart and Soul of Thailand

You are here: Food 101 » Tom Yum Soup: The Heart and Soul of Thailand

What’s the most popular Thai dish at home and abroad? Recently, I made a friendly bet with a friend that it was Pad Thai. I lost, and am now on the hook to pick up our next dinner tab. We determined the winner by comparing a dozen “most popular” and “top ten lists” from food and travel sources. And while numbers two through ten varied, and Pad Thai was always in the top six or seven, number one was almost always the dish my friend had bet on – Tom Yum Soup.

Which made me wonder, what exactly is it that makes Tom Yum loved as much outside Thailand as it is on its home turf? 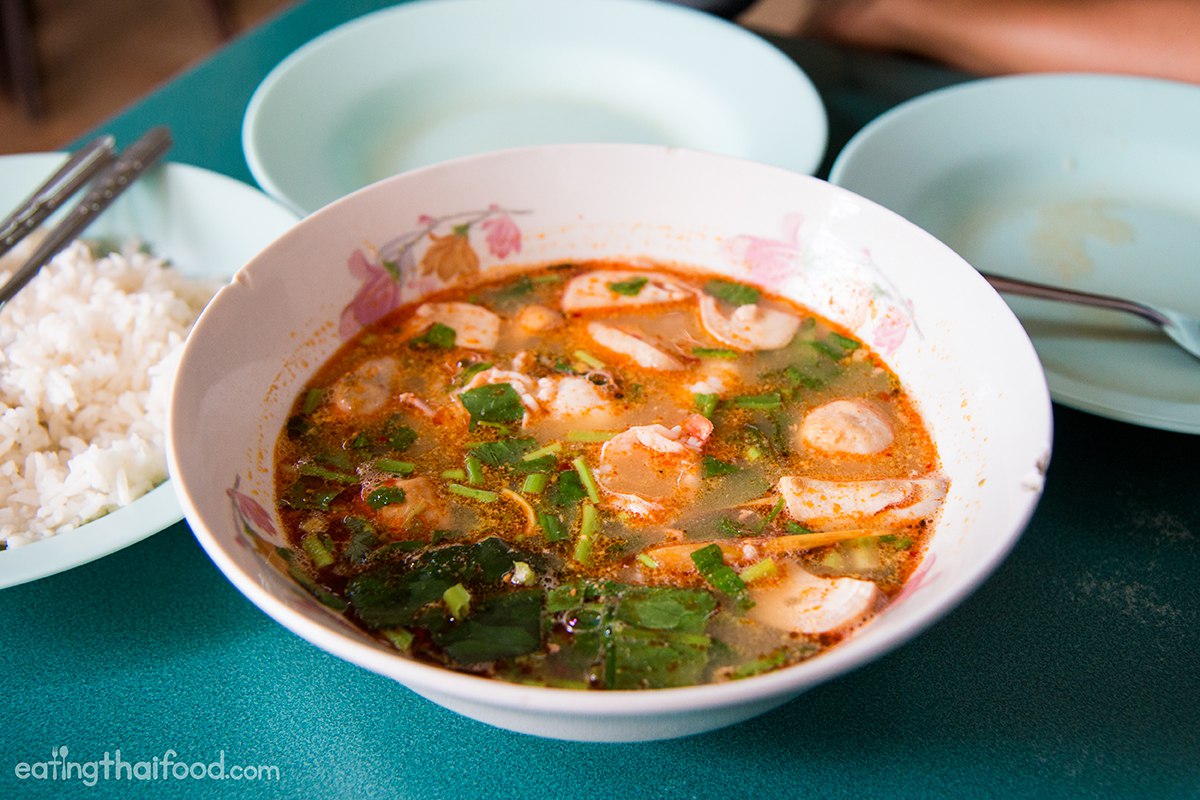 What is Tom Yum Soup?

Classic Tom Yum Soup is a shrimp soup served in its own broth, to which seasonings and vegetables have been added. Sometimes, dairy is also added. One could say the same of other seafood soups, like Billi B, Bouillabaisse, Portuguese Fish Stew, and dozens of others. So what puts Tom Yum over the top in most soup lovers’ minds?

To get the answer, I went straight to Asian food maven Mark Wiens, an American living in Thailand whose food sites, Migrationology and Eating Thai Food, chronicle his adventures eating just about everything made between Mumbai and Shanghai. I figured that, having eaten hundreds of bowls of Tom Yum Soup, he was definitely the person to go to on the topic.

Wiens sees Tom Yum as a symphony rather than a solo or even a quartet. “It’s popular because it includes a balance of flavors, ingredients, and textures, all in a single bowl. When you take a bite of a sour, spicy, and perfectly creamy (from the shrimp) bowl of Tom Yum Goong, it’s one of the best tastes of Thailand.” Goong, by the way, refers to the freshwater shrimp which are traditional to the dish and make the tastiest version of it.

“A traditional bowl of Tom Yum is an aromatic infusion of kaffir lime leaves, lemongrass, and galangal, boiled in water with shrimp, chilies, and typically some kind of vegetable, and lime juice.”

The History of Tom Yum Soup

I searched for the history of Tom Yum and came up empty-handed – in my experience, this is almost always the mark of a very ancient dish, one that preceded written recipes and has become such a part of the culture it does not need further explanation.

According to Wiens, “There’s little information about the history of Tom Yum, but many say that it’s a central Thai soup that developed due to an abundance of freshwater shrimp. Boiled in water as a soup, the shrimp gave the broth a real fishy flavor, so cooks started experimenting by adding local Thai herbs into the boiling water to balance the fishy flavor. The trio of herbs that worked so well to infuse the broth with a beautiful aroma were kaffir lime leaves, lemongrass, and galangal, which are still the three most important ingredients in any bowl of Tom Yum.”

This makes total sense, as Thailand’s natural highway – the Chao Phraya River – flows through central Thailand almost straight south through Bangkok, then empties into the Gulf of Thailand. The river’s fish and water fowl have fed numberless generations of Thai people, and Bangkok’s famous floating markets are filled with upriver people who come to sell their wares. Freshwater shrimp from the river would have become a Bangkok staple early on, along with other ingredients needed for the soup. 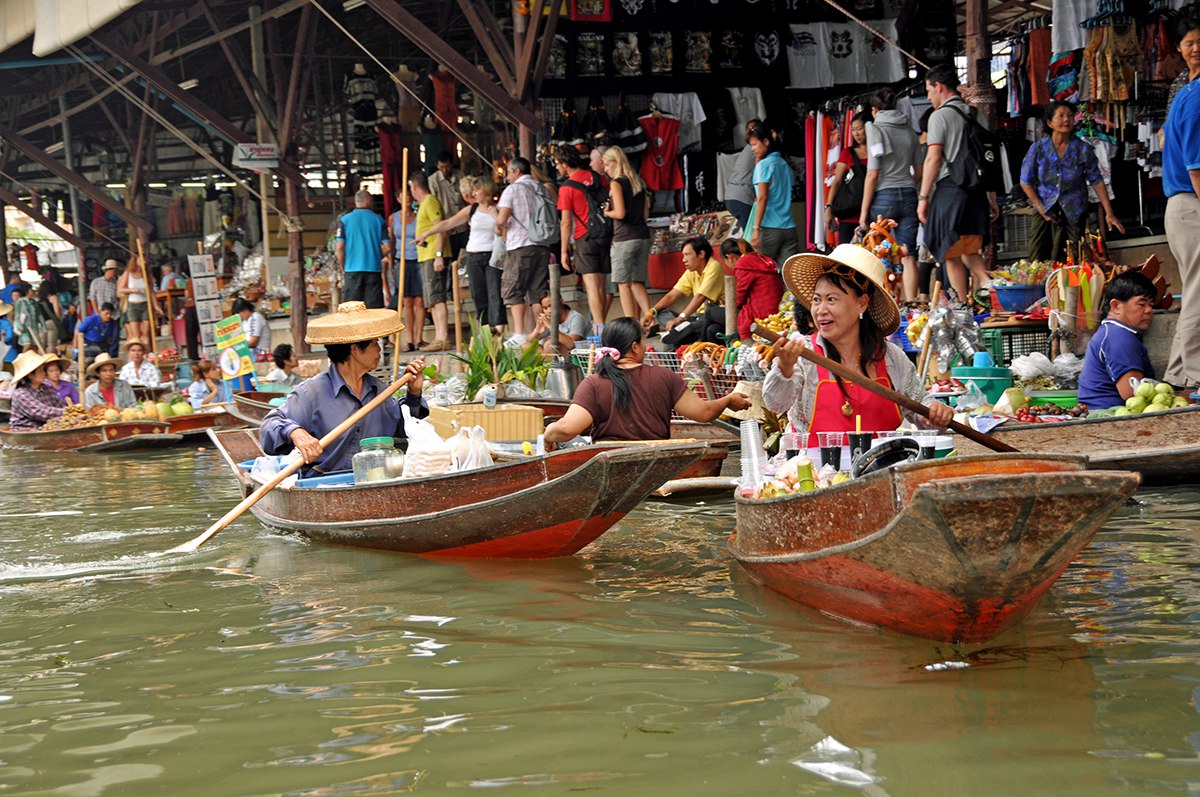 Tom Yum’s history in the U.S. is shorter and much easier to trace. America’s first Thai restaurant opened in Denver around 1960, the brainchild of the Thai wife of a visiting doctor. An outspoken political journalist in her home country, Lily Chittivej liked America’s freedom from political pressure and stayed. She opened the Chada Café at 408 E. 20th Avenue against the advice of Thai friends who told her that Americans would never eat there. They did, and the restaurant prospered. More Thai restaurants opened in Los Angeles near the end of the ‘60s, and the trend got a big boost when servicemen returning from Vietnam found they missed the light, fresh foods of Southeast Asia. Today, Thai is one of America’s favorite cuisines, and can be found from everywhere from Fairbanks to Key West.

How To Make Tom Yum Soup

Despite the popularity of Thai cuisine, relatively few Americans make it for themselves. Tom Yum is a perfect opportunity to find out just how easy it is to enjoy Thai at home as often as you want.

As Mark Wiens reminded us, there are two types of Tom Yum – one with clear broth and one with a creamier, opaque broth. Luckily for those of us who’d like to try both, the two differ only in their finishing stages, so make a big batch and divide it between the two. Go directly to Wiens’ Tom Yum page for an excellent, easy recipe and how-to video.

Though many people think the creamy version is made with coconut milk, it isn’t. The secret ingredient is something that should be on every soup-maker’s pantry shelf already – condensed milk. Bottled and canned ingredients, such as fish sauce and roasted chili paste, can be found in many grocery stores, while ingredients like lemongrass, kaffir lime leaves and galangal can be found fresh or dried in ethnic shops like Kalustyan’s and Bangkok Center Grocery. Freshwater shrimp are almost impossible to get, but this soup is so good you can substitute ocean shrimp, crayfish, langostinos, and even mussels. For my strictly vegan friends, I add a variety of mushrooms, including at least one strong, deeply flavorful type, such as portobello.

If you’ve never made Thai food before, Tom Yum Soup is a good place to start. It’s easy, doesn’t take too long, and – best of all – yields great results on your very first try.

One response to “Tom Yum Soup: The Heart and Soul of Thailand”