What is Coq au Vin?

Contrary to what its pronunciation suggests, coq au vin is not a new food truck dispensing hot chocolate, although that’s not a bad idea either. The literal translation – “rooster in wine” – is accurate but doesn’t really do the dish justice. In fact, it’s a bit like calling a croissant as a dinner roll.

Coq au vin is one of the world’s great braised dishes. In braising, the main ingredient – in this case chicken – is seared in fat, then covered with liquid and slow cooked in a heavy, covered pot, either on top of the stove or in the oven. Pot vegetables are added and, depending on the vegetable, they may also be pan-browned first. In addition to kick-starting the cooking process and sealing meat to retain its juices, braising adds a layer of flavor to dishes that, if simply stewed or boiled, would be rather bland.

Chicken was the first animal to be domesticated for food use. The Egyptians, and later the Romans, practiced remarkably sophisticated breeding programs. The Egyptians increased flocks by building warming chambers that acted as incubators, leaving hens free to lay more eggs. The Romans bred chickens that were larger and far meatier than their wild counterparts, and discovered that castrating roosters produced a larger, juicier bird.

Chicken was considered a delicacy in Rome, and was cooked in a variety of ways, including simmered in wine sauces. Chickens also had a social function – cock fighting was a popular sport, and roosters served as oracles to the Roman military. If the roosters had a good appetite before a battle, victory was at hand. If they refused to eat, it was an ill omen.

While there are no Roman recipes for coq au vin, the availability of wine and of cocks past their prime suggests that a plainer, less haute version of the more elaborate chicken in wine dishes probably existed but was never recorded.

With the fall of Rome, chicken all but vanished from the European table. The large, plump fowl so carefully bred returned to the wild, and chickens shrank to the size they’d been during the Iron Age a thousand years earlier. Medieval cooks relied on fowl like swan, partridge, peacocks and geese to wow their patrons.

Chicken, the first food animal domesticated, had to be re-domesticated. It’s not known exactly when this happened, but by the end of the 16th century, Henri IV’s promise of “a chicken in every peasant’s pot every Sunday” became synonymous with prosperity for the masses. 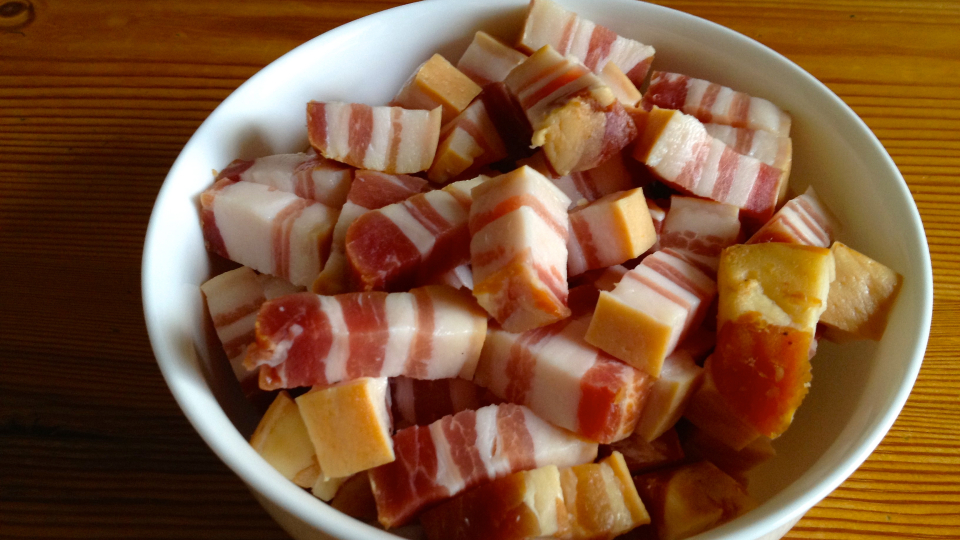 An early recipe, found in a notebook dating back to Henri’s reign, describes the dish as it is today: chicken parts are seared in fat from frying lardons of bacon, then onions and mushrooms are browned in the same fat, the pot is flamed with Cognac, and garlic, herbs and wine are added for the long, slow cook over low heat. The step of flaming with Cognac suggests that this have been an upscale version of the dish. Just as often, the cock’s comb, brains, kidneys and feet also went into the pot, and the sauce was thickened with the chicken’s blood.

An Americanized recipe for coq au vin, thickened with flour rather than blood, appeared in Louis Diat’s Home Cookbook: French Cooking for Americans in 1946. Though Diat was a well-known and well-respected culinary figure at the time, the dish did not catch on until Julia Child popularized it, first in her cookbooks and then on her television series.

Among Child’s most awe-inspiring traits was her tenacity in recipe testing. It was not enough for a dish to taste good or even excellent – it also had to taste authentic, as much like the original as possible. Like Diat, she dispensed with blood and brains but made two important additions: tomato paste and brown stock, giving the dish the tang and depth of the original. Julia Child’s recipe for coq au vin, combined with her contagious enthusiasm for truly good food, made coq au vin one of the most popular dishes of the 1960s and ‘70s. 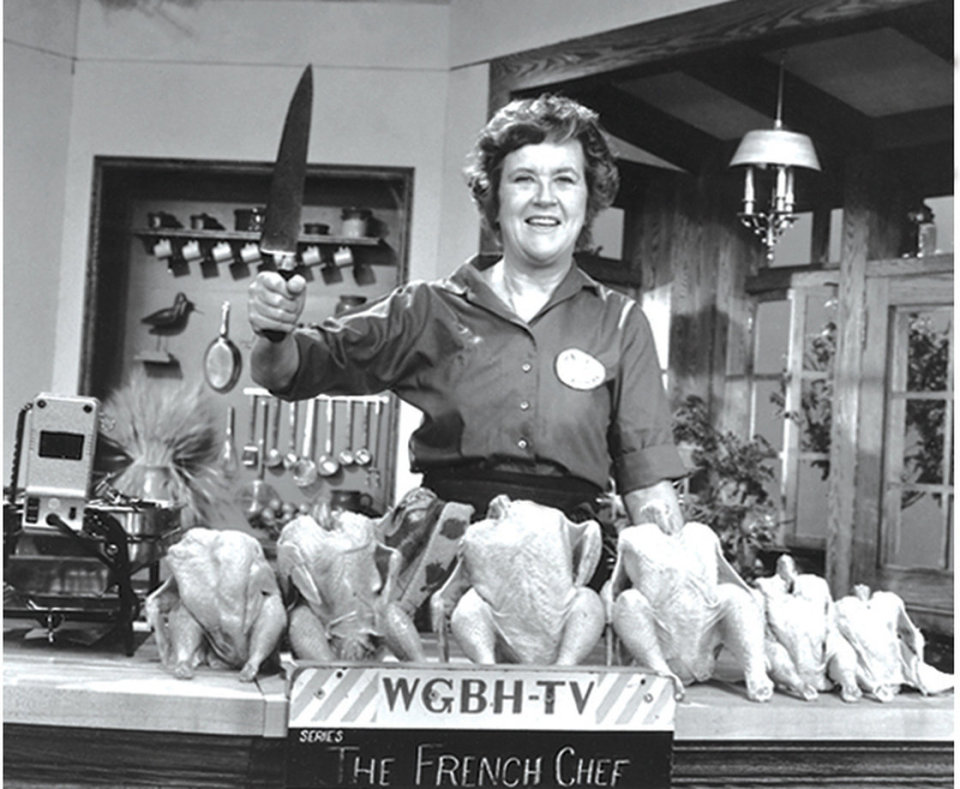 Coq au vin has always been a peasant dish, touted as a way to make use of a stringy old bird. What they don’t tell you is that, while the stringy old bird did indeed need tenderizing, it also had flavor in abundance – aged on the bone, so to speak. Unless you have access to a farm, you cannot buy that flavor today. Even the stewing chickens that were available in the 1960’s have vanished. Our chicken is tender, young, juicy, and often de-boned. Though the method for making coq au vin has not changed over the years, take into account that our chicken has. Use only bone-in parts, and if you aren’t cutting up a whole chicken, choose thighs rather than breasts, as theur stronger flavor is a better match for the dish. Check your chicken during cooking – you don’t want it falling off the bone, and may need to remove it from the pot while the sauce finishes reducing.

Another thing to remember is that it’s fine to use whatever vegetables you have on hand or particularly like and, although Burgundy wine is the classic, you can use any hearty red. Since I like meat and fruit together, I prefer a good shiraz with its plumy, black fruit notes. I also like to add root vegetables like carrots and parsnips to the braise. As for what to serve coq au vin with – good bread to soak up the sauce makes grateful peasants of us all.