Peruse the cocktail list at most bars these days and you’ll surely catch at least a few mentions of “bitters” in the ingredients list. But what exactly are bitters? What are they made from and how are they used? Well, first off, let’s start with what they’re not. Contrary to the name, bitters are not necessarily bitter –though some can have a bitter or bittersweet taste. But rather, they vary in taste, from sweet to savory. As for what they are, bitters are simply varying blends of herbs, spices and other aromatics infused in high proof alcohol to create a concentrated liquor used to bring the flavor palate of your cocktail to the next level. 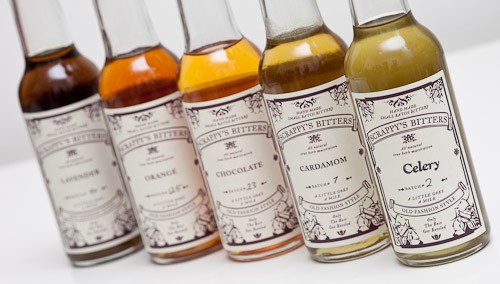 Historically, bitters began as catch-all tonics touted by snake-oil salesmen promising cures for a myriad of diseases. And, while some do in fact aid in digestion, for the most part they have no real medicinal properties. However, rather than the trend simply dying out, people began incorporating aromatic bitters into cocktails (presumably some dude with an ascot and a monocle was all “Reginald, this tincture does bugger all for my chronic tuberculosis, but damn if it isn’t right tasty mixed with bourbon!” Then he fought some crocodiles and started his own bitters company.) and soon they became an essential ingredient in any good mixed drink. But all good things must come to an end.  Along came prohibition ruining everybody’s fun; bitters fell by the wayside and, aside from a few remaining beacons (brands like Angostura and Peychaud’s), were all but forgotten.

However, with the recent resurgence of cocktail enthusiasts and mustachioed mixologists in suspenders, bitters have experienced quite a big revival. As mentioned before, Angostura and Peychaud remain the go to classics. But the list of brands and flavor combinations are quickly growing. Nowadays, you can find everything from your classic “orange bitters” (great for Sazeracs) to Bittermen’s Xocolatl Mole Bitters

to Brooklyn Hemispherical’s Black Mission Fig Bitters. They generally come in tiny little bottles reminiscent of an old-timey apothecary, which, in this writer’s humble opinion, makes them all the more awesome. Ingredients cover a wide range of spices, herbs, fruits, and nuts. Popular choices include things like ginger, coriander, mugwort, dandelion root, coffee beans, citrus peel, hibiscus and barberry root (not gonna lie, a lot of recipes sound straight out of Hogwarts). The ingredients are combined to create varying flavor palates, and infused in alcohol for anywhere from days to a few weeks. As you can imagine, cocktail bitters are extremely potent, and you only need a drop or two to flavor a drink. 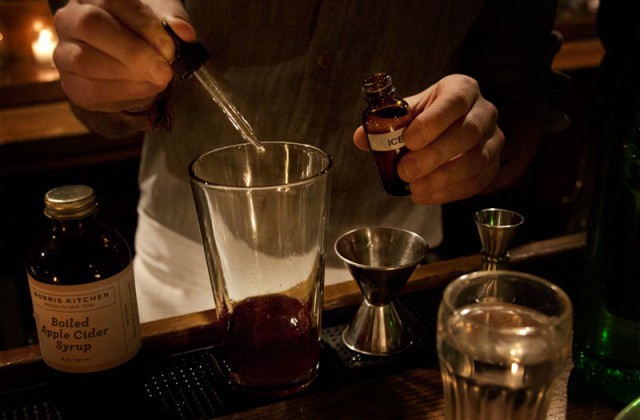 If all this sounds a bit complicated, I feel ya. But in reality, you can’t go wrong –experimentation is a big part of what’s fun about using bitters. Ask a bartender friend for his/her recommendations, or grab one of the many recent books published on the subject

. If you’re feeling really adventurous, you can even make your own. And don’t limit yourself to just cocktails, bitters can also be used in many non-alcoholic drinks and even for cooking –try some in soups or the next time you bake a pie. So, next time you’re feeling thirsty or like you could use a little more Gatsby-era glamour in your life, head to the nearest bar, rustle up a Rob Roy complete with some Angostura orange bitters, kick back, and enjoy!

Do you have a favorite bitters? What about a great cocktail recipe that utilizes them?