You are here: Food 101 » Cherries Jubilee: Simple Yet Grand

Twice a year, I celebrate the fact that sometimes life really is just a bowl of cherries. One of these occasions is July 4th, when cherry pie is the order of the day, and the other is Valentine’s Day. Forget the chocolate, I eat that all year long. When it comes to the day of desire, I want Cherries Jubilee.

What is Cherries Jubilee?

Despite its profile as a fussy, showy, and wee bit kitschy dessert, Cherries Jubilee is actually none of these things. A recipe for Cherries Jubilee is barely required: dark sweet cherries sweetened and warmed in their juice, flambéed, and served over vanilla ice cream. Cooking time is minimal, and as for kitschy, well, yesterday’s fashion is often today’s kitsch and tomorrow’s elegant heirloom. 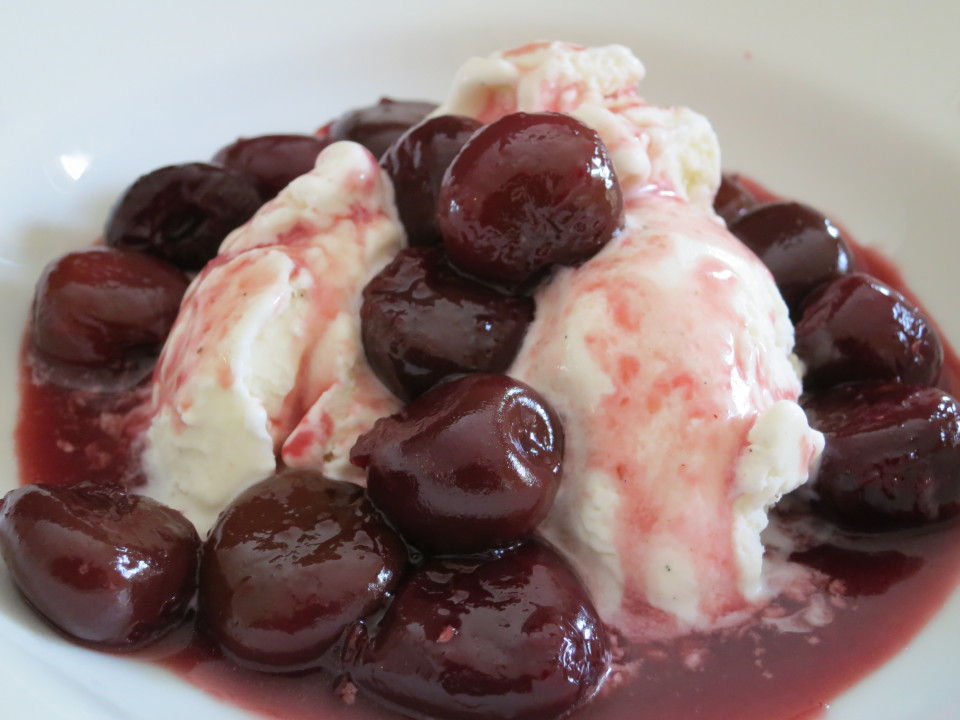 The History of Cherries Jubilee

Cherries Jubilee was created by Auguste Escoffier, the prominent French chef and writer who, as the first prominent chef to cook for the public rather than in private homes, took restaurant fare to new heights. After spending the first half of his career in Paris and Lucerne, he relocated to London to take charge of the Savoy Hotel kitchen. Among his innovations was offering items a la carte, reorganizing the professional kitchen for maximum efficiency (under his direction, lunch could be served at the rate of 500 plates an hour), and argued that kitchen workers should receive medical benefits and pensions. His major work, Le Guide Culinaire, published in 1903, is still consulted by chefs today.

As a chef, Escoffier streamlined many old recipes and invented hundreds of new ones. He won Sarah Bernhardt’s heart with eggs scrambled in champagne, and served a new dessert, Peach Melba, at a dinner to honor opera diva Nellie Melba’s success at Convent Garden. And in 1887, to celebrate Queen Victoria’s 50th year as monarch, he created Cherries Jubilee. The Queen’s love of cherries was well known, and Escoffier adapted the old French method of preserving fruit in sugar and brandy to make a truly celebratory dish. The original dish did not include ice cream, nor did the recipe included in Le Guide Culinaire, but vanilla ice cream soon became a staple feature of the dessert.

Cherries Jubilee became wildly popular in fancy restaurants and hit its peak in the 1950s and ‘60s, and adventurous home cooks wowed their friends by making it the spectacular finish for dinner parties. By the end of the 1960s, the dish had become over-exposed and something of a cliché, and fell out of favor. 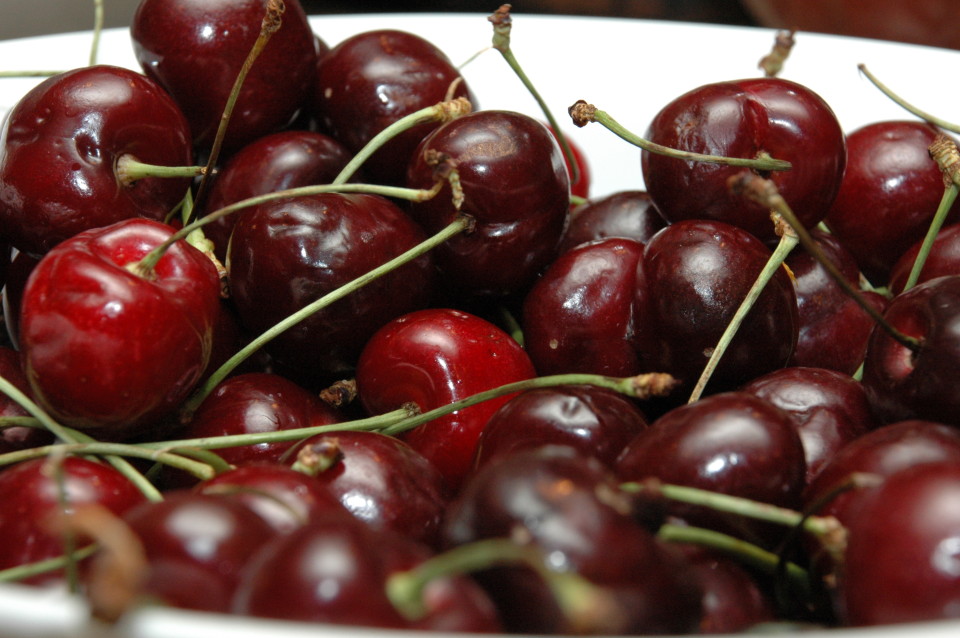 How To Make Cherries Jubilee

I have always wondered at Cherries Jubilee’s fall from grace. Other desserts have suffered the same saturation of popularity and been set aside for awhile, only to come into fashion once again. Why not Cherries Jubilee? Looking for a good online recipe to refer readers to, I think I’ve discovered the reason why.

Early recipes for Cherries Jubilee focus on the cherries, adding just enough water and sugar to make a syrup. More recent recipes dramatically increase the amount of sugar and expand the number of ingredients. Some call for canned cherry pie mix, and even those that don’t often call for four times as much sugar, orange juice, cornstarch, and spices that would make a gloppy, pie-like filling and finish it with a drowning amount of brandy –no wonder the dessert lost its appeal.

A Simple Recipe for Cherries Jubilee

Here’s how I make Cherries Jubilee.

1. To make generous serving for two, you’ll need a half pound (about 1 ½ to 2 cups) of pitted dark sweet cherries, also known as bing cherries. Use fresh or frozen and defrosted cherries.

2. Melt one tablespoon of butter in a pan and add 2 tablespoons of white sugar or packed brown sugar.

3. Heat, stirring, until the sugar dissolves. Add the cherries, a tablespoon of water or lemon juice, and continue to heat until the cherries release their juice.

4. Simmer until the liquid is reduced to a thin syrup.

5. Remove from the heat and stir in 2 tablespoons of Kirsch (cherry brandy). If you don’t have Kirsch, plain brandy will do. The syrup should be hot enough to warm the brandy, as cold spirits will not ignite.

6. Flambé at tableside by holding a long fireplace match just above the surface of the mixture (you are actually igniting the vapors, not the brandy itself) and serve immediately. This recipe can be doubled or tripled as needed. 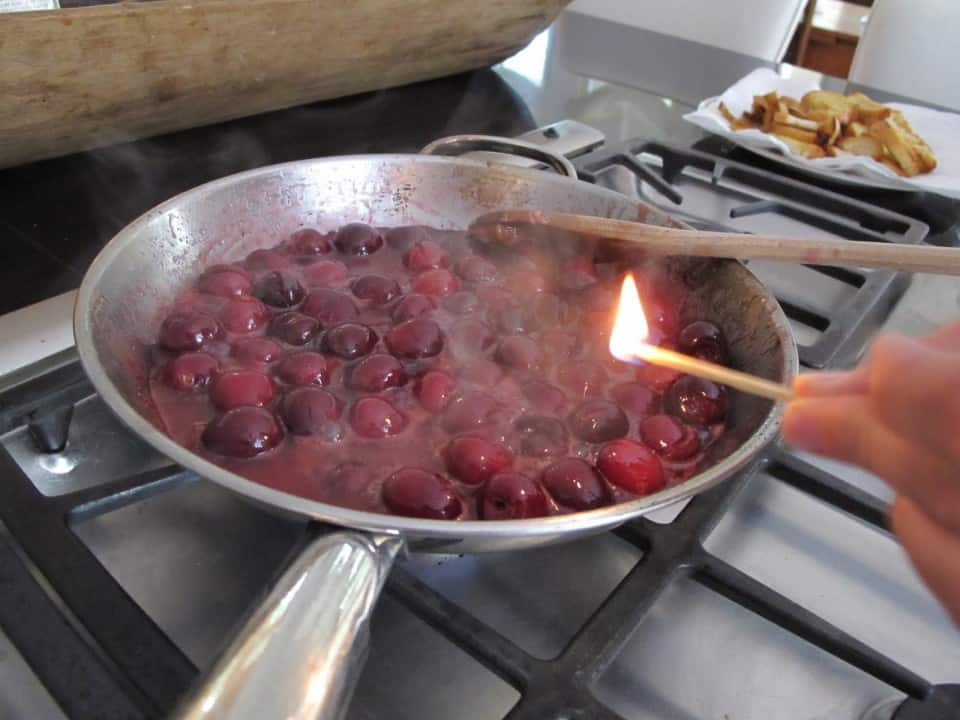 Photo Credit: Peace and Love in the Kitchen

My favorite ice cream to serve Cherries Jubilee with is French vanilla, whose custardy smoothness is a perfect contrast for the sharp fruit taste of the cherries. Because this is a special occasion dessert, I like to make the ice cream special as well by forming servings into snowball-sized balls, rolling them in shredded coconut, and having them frozen and ready to go as the flambé is lit.

And now that I’m remembering how good Cherries Jubilee is, how simple and how delicious, I’m looking for reasons to make it more often. Apparently I’m not alone. National Cherries Jubilee Day is every September 24th.