With roots in France, Spain, Africa, the Caribbean, and Native America, jambalaya is about as USA as food gets, a literal melting pot of cuisines and cultures. It’s one of a handful of dishes that was created here by the people, rather than arriving with immigrants or originating in a professional kitchen. Like all Americans, it’s a thorough individual — you can eat your way across Louisiana, order jambalaya every single day, and never have the same meal twice.

Jambalaya is a one-pot meal popular throughout the southeast Gulf states, especially Louisiana, its home state. Neither a soup nor a stew, it’s a hearty mix of rice, vegetables, spices, along with combinations of meat, seafood, or both.

There are two distinct jambalaya traditions, Cajun and Creole. Traditionally, Cajun jambalaya includes ham, smoked sausage, chicken, or even game and is made without tomatoes, while Creole jambalaya uses tomatoes and is focused on seafood rather than meat. However, jambalaya traditions have mingled and borrowed from each other over time, and families have evolved their own recipes, so every bowl of jambalaya is a bit different from the next. 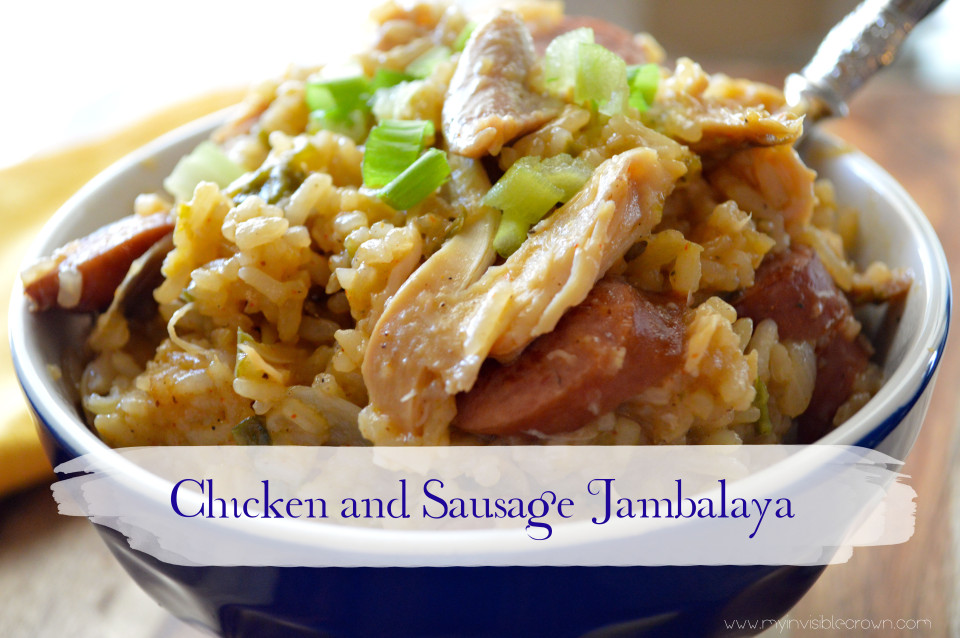 The History of Jambalaya

The history of jambalaya is a mini-lesson in the history of Louisiana and its rich culture. Cajun is a shortened form of Acadian, the French Catholic families who were expelled from Canada in the 1700s when Britain insisted they convert to the Protestant faith. They re-settled in the rural lands west of New Orleans and prospered as hunters and farmers, which is why Cajun jambalaya is meat focused and considered French.

Creole culture is centered in New Orleans and embraces people of French and Spanish – or French, Spanish, African and West Indies – ancestry. The Creole version of jambalaya, which traditionally includes tomatoes and seafood, is often referred to as red jambalaya or city-French cooking, while the Cajun version is known as country-French cooking. 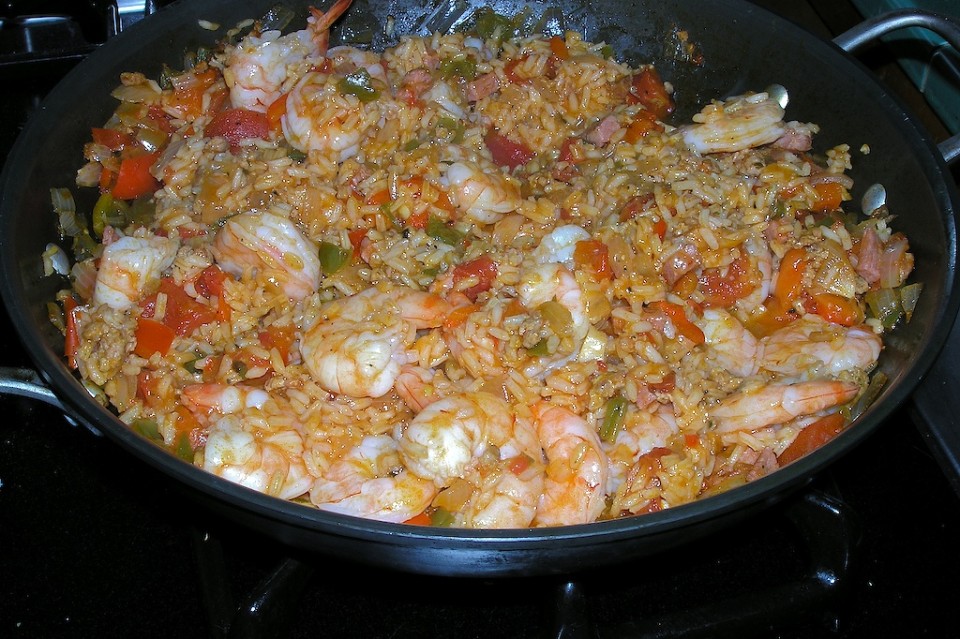 Which jambalaya came first is hard determine. Some feel the Creole version, with its resemblance to Spanish paella, is the original, and the addition of tomatoes came as an attempt to give the dish the vibrant color that saffron, then unavailable in the New World, gives to paella. On the other hand, consider the name: jambalaya is a combination of jamb, from jambon, the French world for ham, while the “aya” comes from an African word for rice, so the original name may have been jamb à l’aya — “ham served rice style” — referring to the principle meat in the Cajun version and suggesting that the Cajuns got there first.

At the turn of the century, the largest public gatherings in the south were church fairs, political rallies, and family gatherings. Most of these were outdoor affairs, and jambalaya, which required nothing more to prepare than a large pot and a fire, became the ideal food to serve. It was World War II that made the dish known in the north, as African Americans and other southerners migrated to cities like Detroit and Chicago to take jobs in war-production plants, and servicemen from both north and south formed friendships that shaped post-war America.

How to Make Jambalaya

Though Cajun and Creole jambalayas can contain many of the same ingredients, the cooking method is different for each. Cajun style begins with browning the meats in a cast iron skillet. When the meat is brown and caramelized, it is removed and set aside. Lard or oil is added to the pot and any bits of meat that have stuck to it are scraped up. Then what’s known in “the trinity” of Louisiana cooking is added – a mix consisting of half chopped onions, a quarter chopped celery, and a quarter chopped red or green bell peppers. The mix is sautéed until soft, stock and seasonings are added, the meat is returned to the pot, and the mixture is covered and simmered on low heat for at least an hour. When the simmering is finished, the pot is brought to a boil, uncooked rice is added, the temperature is reduced again, covered, and left to cook until the liquid has been absorbed and the rice is done. 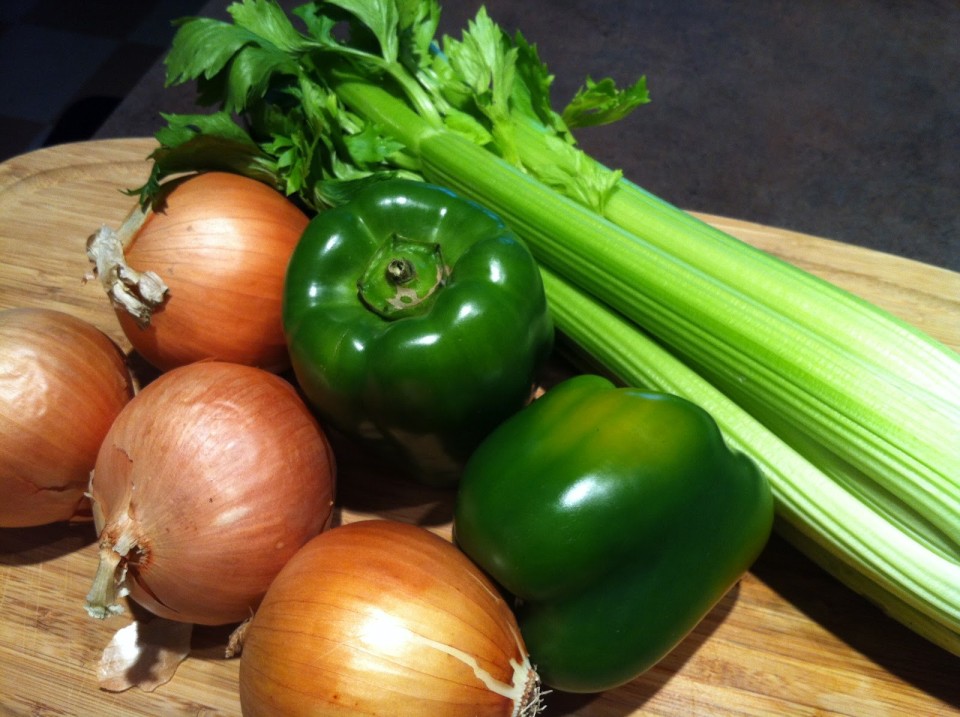 Photo Credit: Foodie For One

Creole jambalaya, more familiar to most of us thanks to the fame of New Orleans’ restaurants, begins by sautéing the trinity, adding the meat, tomatoes, any additional vegetables, and seafood, then then covered and simmered until everything is cooked. Stock and raw rice are added in equal amounts, the kettle is brought to a boil, covered and simmered for twenty minutes to an hour with occasional stirring.

Of course, just as the ingredients vary from recipe to recipe, cooking methods vary too, to make sure everything done but not overcooked or mushy.

Try a Creole jambalaya recipe, a recipe for Cajun jambalaya, or cook up a version of your own, and never pass up the chance to sample whatever version of jambalaya you come across in your culinary travels.